The Travis County Republican Party here in Austin dived into the deep end of the crazy pool Monday evening: 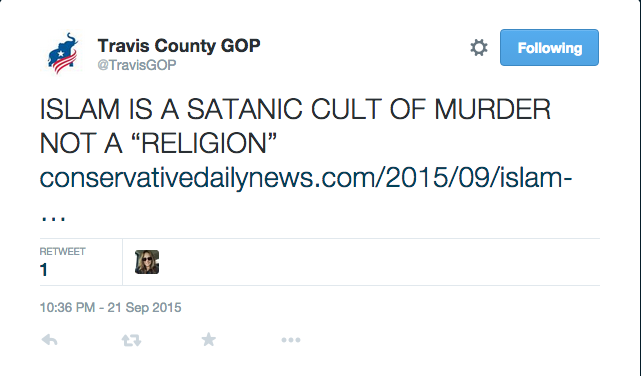 “Christianity is a religion but Islam is merely a satanic cult of rape, torture, murder, bestiality, and satan worship!!!!!”

It’s all downhill from there, with the writer demonstrating (despite his protests) an almost unhinged hatred for Muslims. But he also attacks George W. Bush, calling the Republican former president a “coward and traitor.” He even goes after other Christians, notably the Roman Catholic Church. Some choice passages:

“I remember an instance in Iraq after the overthrow of Saddam Hussein where a group of ‘jihadists’ fired on American soldiers then hid in a mosque. The Americans returned fire, causing minor damage. The ‘outrage’ of the worldwide islamic cult and the Bush hating ‘American’ media was vociferous. The American government led by the coward and traitor George Bush immediately dispatched millions of dollars to the islamist terrorists to pay homage to allah/satan but before any repairs were made the other sect of the satanic cult blew it up with a truck bomb. The total destruction of the house of satan was met with silence from moslems and the ‘American’ media.”

“The catholic church is very prominent in the importation of members of the satanic cult of islam while ignoring middle east Christians who are being slaughtered by islamic satanists.”

“Liberals in America stand with the Godless islamic cult against Christianity.”

“Those who constantly scream ‘separation of church and state’ in regards to the legitimate religion of Christianity ( the religion this nation is based on) have no issue with the satanic cult of islam being taught to their children in the public schools.”

“I wonder how long it will be until God destroys this nation (as He destroyed Sodom and Gomorrah) for the cruelty to the innocent, and its promotion of immorality and satan worship.”

The Travis County GOP’s tweet went up a little after 10:30 p.m. on Monday. So now we know what kind of crazy stuff the folks over there are reading late at night.