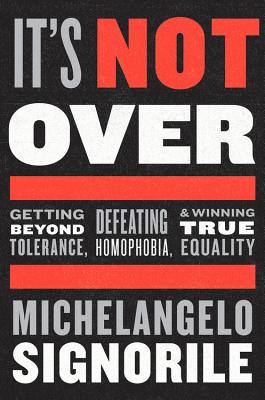 The clock may have run out on one of the worst of the anti-LGBT bills in the Texas House Thursday night, but that bill’s supporters are still looking for other opportunities to enshrine discrimination in Texas law before the legislative session ends.

So on Monday Texas Freedom Network Kathy Miller will talk with SiriusXM radio host Michelangelo Signorile about our efforts fighting for LGBT equality at the Texas Capitol. Signorile is bringing his program to Austin for two days — May 18-19 — to talk about that battle.

Signorile’s show airs 2-5 p.m. Central time/3-6 p.m. Eastern time on weekdays on SiriusXM’s Channel 127. Right now Kathy is slated to be on the program at 3:35 Central time on Monday. But make sure also to tune in both days for the other discussions over the more than 20 anti-LGBT bills filed in the Texas Legislature this year.

Signorile will also be speaking and signing copies of his new book, It’s Not Over: Getting Beyond Tolerance, Defeating Homophobia, and Winning True Equality, at BookPeople in Austin on May 18. Click here for more on that event.