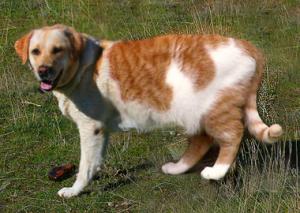 We suppose having a sense of humor is important when elected officials are turning your state into a national laughingstock. Religion Dispatches offers a shocking photo of the rare “dog-cat” that Texas State Board of Education member Ken Mercer, R-San Antonio, must have been talking about during the recent debate over teaching about evolution. Mercer has argued that the absence of transitional animals like a “dog-cat” and a “cat-rat” is proof that evolution is a fraud. Humor aside, Lauri Lebo’s accompanying article is an excellent review of what happened in Texas. She even gets board Chairman Don McLeroy, R-Bryan, to once again argue that science should include supernatural explanations.

And in a wide-ranging interview with the American Association for the Advancement of Science’s Science Magazine, the head of the White House Office of Science and Technology, John Holdren, weighs in on the Lone Star mess:

(M)y impression from reading about it is that it was not a step forward but rather a step backward. Of course, all science needs to be skeptical. It’s hard to be against skepticism. But when you get into the domain of promoting particular views about the basis for skepticism of evolution, and those views are not really valid, then I think we have a problem. I think we need to be giving our kids a modern education in biology, and the underpinning of modern biology is evolution. And countervailing views that are not really science, if they are taught at all, should be taught in some other part of the curriculum.

12 thoughts on “Texas, Science and ‘Dog-Cats’ in the News”