Last month we reintroduced you to Texas Rising, a TFN project that seeks to uplift the voices of the rising electorate, 18-29 year olds, across the state. This weekend more than 40 of those young people, all TFN student chapter members from all parts of the state, were in Austin for intensive training sessions we’re calling the Texas Rising Summer Institute.

We’d like to introduce you to some of these amazing young people, starting with Caitlin Rodriguez in a Q&A conducted by another Texas Rising student, James Carneiro. 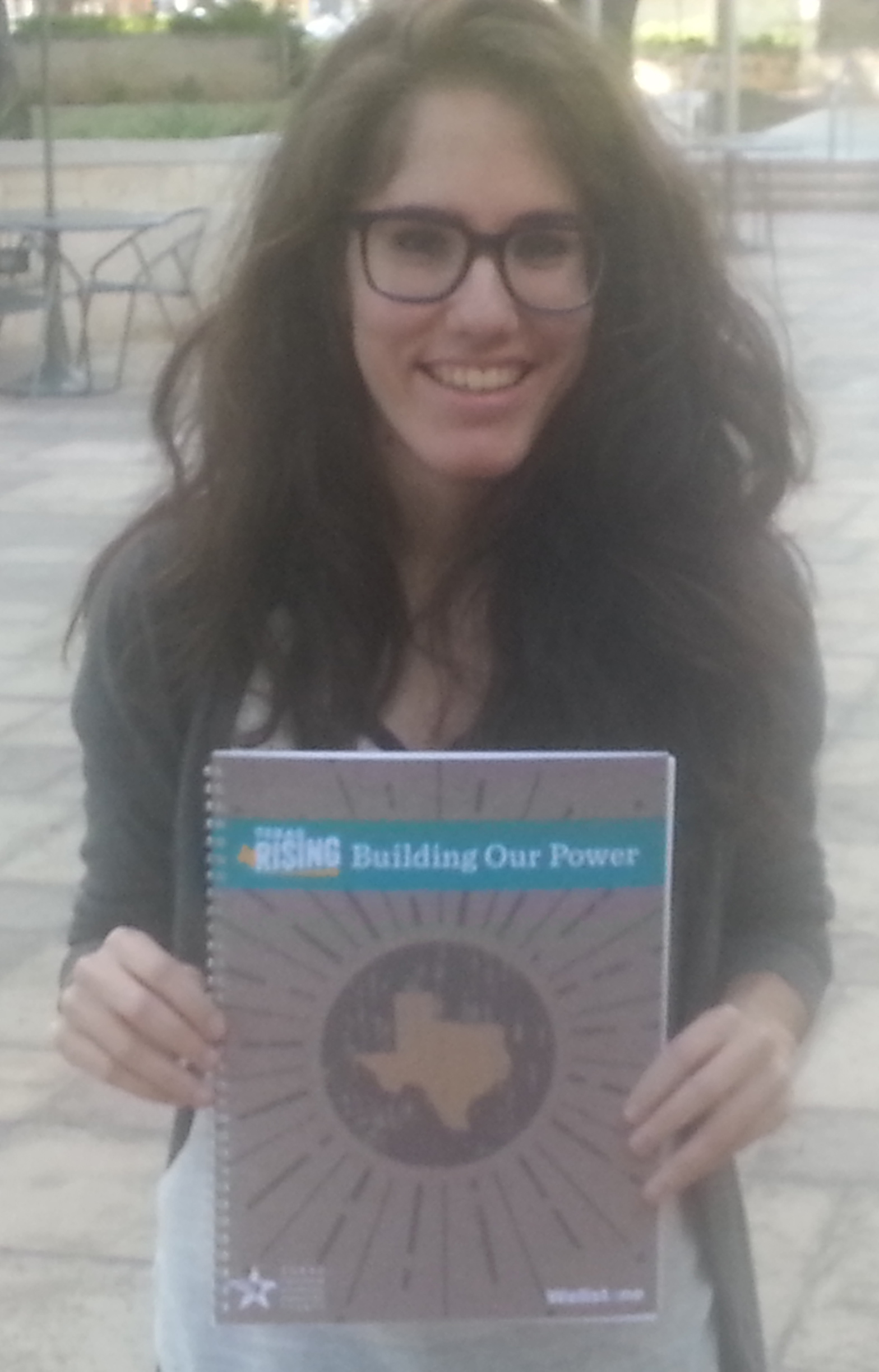 Where do you go to school? What’s your graduation year and major?
I’m a journalism major and a sociology minor at Texas State University and plan to graduate in spring 2016.

Where did you grow up? What was your childhood like?
I grew up in El Paso. I had a really enjoyable childhood with my parents and my younger brother. My parents were and still are very supportive of anything I want to pursue, whether it be acting (I did a lot of theater until the end of high school) or writing or anything else creative. My parents pushed me pretty hard academically, but only because they knew what I was capable of and it really has benefited me as I venture into adulthood (ah, scary!). I had a really normal childhood filled with friends and family and good things. I was all around pretty happy.

What issues are you passionate about?
I’m really passionate about women’s issues and LGBTQ issues. At least it started out that way. As I learn how all of these issues are really so intertwined I definitely think the breadth of what I’m passionate about is widening. I care about issues involving people of color, especially regarding immigration, because growing up practically on the U.S.-Mexico border I saw exactly who those laws were affecting. I’ve recently become interested in worker’s rights as well, involving issues like minimum wage and health care coverage. To sum it up, I’m really just passionate about people and working so that no one is faced with any kind of suffering because of who they are, where they were born, where they work, etc.

When did you start advocating for progressive issues?
I first started actively engaging in these issues when I entered college, but it was a slow process. I’ve spent these first two years of university really just trying to learn as much as I can about this range of different issues. As I enter my third year, it’s the first time that I’m really starting to take action, aside from educating myself. I’ve taken a student journalism position at URGE (formally known as Choice USA) and I’ve taken a leadership position as media manager in Texas State’s TFN student chapter.

What brought you to TFN and why do you stay?
For a year or so I’ve been a member of my campus’s feminist organization, Feminists United. At the end of this spring semester, we were informed that Texas State would be building its own TFN chapter headed by one of Feminists United’s members, Holly Doyle. She was looking for people to stand behind her in getting the organization off the ground, so I signed on to be her media manager. I thought it would be a position that fit given that I’m a journalism major and I have a background in mass/social media. It would be a new opportunity for me to not only strengthen my media skills, but also give me a chance to work on something directly related to the progressive issues that I care about and that affect Texans.

What do you want to do when you graduate?
That’s a hard question for me because I can’t give you the most concrete answer. I know I want to stay with journalism because writing is something I feel most comfortable and passionate doing. I think language is a platform that allows us to exchange ideas and remain informed and listen to people who live lives different than our own. I want to do something that incorporates my passion for both people and writing. When I have been asked this question, I used to say I would want to give a voice to the voiceless, but recently I read a quote by Arundhati Roy who won the Sydney Peace Prize in 2004. In her speech, she said, “There’s really no such thing as the voiceless. There are only the deliberately silenced, or the preferably unheard.” Now that I think about it, I completely agree with her. Everyone has a voice, but it’s the society and media climate we live in that decides which voices are most important. I feel like it’s those people who are deliberately silenced who are the most important. I want to be the outlet through which they can be heard.

Anything else we should know?
I feel like this is a question they ask at the end of a dating profile where the appropriate response is: “I’m really open, ask me just about anything and I’ll answer.” But it’s true, I am pretty open. I guess you should know that, as well as that I’m really excited to start this new work with TFN because I think it’s an organization that Texas State students really need and can benefit greatly from.