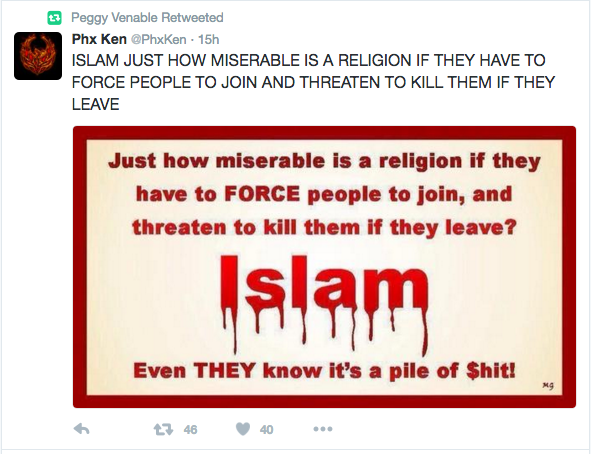 Never mind, of course, that the murderers in Lahore don’t represent the world’s 1.6 billion Muslims.

The terrorist attacks on Christians and other non-Muslims in Lahore and elsewhere are evil and repulsive. But so is promoting hatred of an entire religion because of the actions of extremists. In fact, most victims of terrorist attacks linked to extremist groups like the Taliban, Al Qaeda and ISIS have been — by far — Muslims.

We’ll also note that the post Venable retweeted comes from @PhxKen, who apparently sees all Muslims as “the enemy”:

DEALING WITH RADICAL MUSLIMS! RULES OF ENGAGEMENT!! RULE #1: KILL THE ENEMY. RULE#2 THERE IS NO RULE #2 pic.twitter.com/XDkKB8jGFD