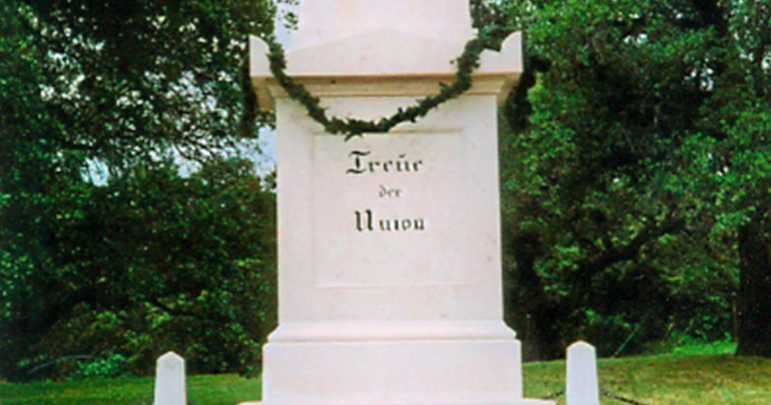 With the State Board of Education currently debating whether to #TeachTheTruth about the history of slavery, the Confederacy and the Civil War in Texas public schools, a group of activists has launched a new effort to bring attention to the real history of that period. In August the group plans a march commemorating the 1862 massacre of pro-Union German immigrants in Texas who had refused to take up arms for the Confederacy. The Treue Der Union monument in Comfort honors their memory and courage. Texas Public Radio aired a story about monument and its history in May.

The August 11-12 march from Comfort to Fredericksburg will include various stops with presentations from organizers, activists and historians. Check out the Facebook event page here. You can also learn more about our efforts to #TeachTheTruth in social studies curriculum standards for Texas public schools here.

On May 17-19, a group of hard-working activists from Take ‘Em Down Jax in Jacksonville, Fla., marched 40 miles to call on local government to take down monuments that honor secession and slavery.

Anything Florida can do, Texas can do.

So on August 11, De-Confederate Austin will lead a twenty-mile March for History through the Hill Country from Comfort to Fredericksburg to support accurate historical education in Texas public schools and accurate moral representation in our public monuments. The March will be the centerpiece of a three-day series of events and tours. All are welcome to participate in any of the events; no one needs to march to be involved!

De-Confederate Austin is part of a growing national network calling for historical accuracy and moral clarity about the racial history of the United States, especially around the Civil War. Since you can’t honor someone for doing something that you know is wrong, we can’t honor people for Confederate service while also understanding that the Confederacy’s cause was slavery and that the cause was wicked: the monuments obscure historical and moral reality. And they are a slap in the face to Americans who have struggled for freedom.

Our cause is positive: the citizens of a free republic have to know the history of their country, especially the history of its internal divisions, and we’re working on getting that history before the public. Even though we’re a very new group, we’ve been active: we’ve been involved in the renaming of Austin schools and streets and the removal of Confederate groups from Austin’s Veterans Day Parade. We’ve also started a series of History Picnics.

We’re marching shortly before the State Board of Education meets to reconsider our public schools’ social studies curriculum standards and a few months before the state Legislature seems likely to consider removing a dishonest neo-Confederate plaque from the Capitol building or, on the other hand, forbidding the removal of Confederate monuments anywhere in Texas. We hope that the event will show how Texans will stand for our history and our country’s moral aspirations. In particular, we will be marching in honor of Hill Country German settlers who were murdered in August 10, 1862, for remaining true to the Union. Their monument stands in Comfort. That’s the sort of forgotten history that Texas children deserve to learn.

With historical central Texas towns and historical sites and monuments at each end, beautiful Hill Country scenery. historical presentations at various points (including the beginning and end), and marching songs and camaraderie, our march won’t be something to miss!

Before we can complete our logistical preparations and speaker line-up, we need to know who will join us. For our details so far, please join the De-Confederate Austin group on Facebook and look for our event, the March for History. If you can participate in any part of the event series, please do! Can’t come? Tell your local social studies teacher about us!