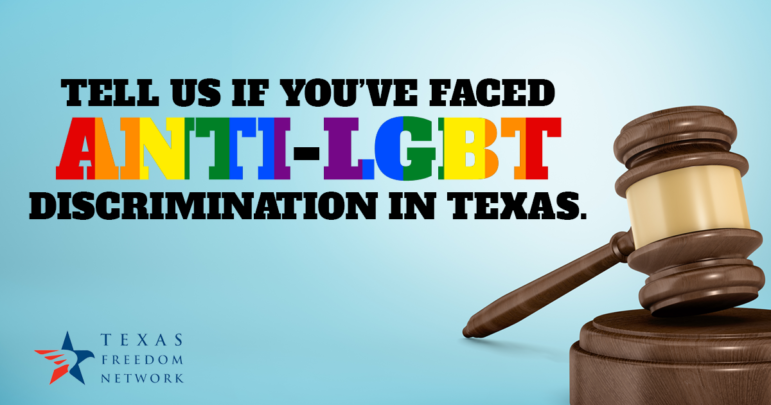 Nearly three years after the U.S. Supreme Court ruled that bans on same-sex marriage are unconstitutional, some public officials are still trying to use religion as an excuse to discriminate against gay and lesbian families. We need your help to find out just how widespread the problem is in the Lone Star State.

After the Supreme Court’s marriage ruling on June 26, 2015, Texas Attorney General Ken Paxton very quickly released a formal and outrageous opinion suggesting that county clerks, judges and other public officials could cite religious objections to justify refusing to issue marriage licenses or conduct weddings for same-sex couples. Some public officials did just that. One county clerk in North Texas cost taxpayers more than $40,000 after a gay couple sued over her refusal to issue them a marriage license.

Last year far-right lawmakers in Texas tried to pass legislation — such as SB 522 — to shield public officials who refuse to serve LGBT taxpayers or anyone else who fails to meet their personal moral standards. Those bills were among two dozen anti-LGBT measures filed for the session.

One bill passed — HB 3859, allowing religious adoption and foster care agencies to discriminate against LGBT families and kids. Other anti-LGBT bills failed. But same-sex couples still report difficulties finding officiants for their civil wedding ceremonies, particularly where a local official or justice of the peace refuses to marry same-sex couples on purported religious grounds. We know of at least two JPs, one in the Dallas area and the other in Waco, who have publicly stated their refusal to officiate weddings for same-sex couples.

We are increasingly concerned about these discriminatory refusals. In keeping with our work promoting equality for all, we want to protect our members and all LGBT Texans from discrimination.

Here’s how you can help. Have you or another LGBT couple you know been turned away when seeking to marry? Do you plan to get married but are unsure whether your local justice of the peace will officiate or turn you away on your wedding day? Please let us know by sending us an email at equality@tfn.org.

Learning more about the challenges same-sex couples face can help us determine what actions we might take to protect our members and all LGBT Texans seeking to exercise their right to marry.