An update has been added to the end of this post.

One more (possibly final?) thing on Mary Lou Bruner. As far as we can tell, she has not returned phone calls from reporters seeking comment on the election results that saw her lose the Texas State Board of Education Republican primary runoff to Keven Ellis of Lufkin.

But she still has the Facebook account where she made the many controversial comments that first made the SBOE District 9 race a national story. A few hours after the race was called, Bruner took to Facebook and offered a dignified concession:

While campaigning and traveling across the beautiful rural counties of Texas SBOE-9, I have been blessed to get to know so many wonderful families in North and East Texas.

I want to thank all of the faithful volunteers and friends who supported my candidacy and shared my dream of Texas schools returning to the traditional knowledge and skills that made the USA the leader of the world.

But then, the following day, she added another post in which she appears to call those who opposed her as “cock-roaches” and “evil.” She first refers to them as the “Establishment” and then she lumps in public schools and politicians. See for yourself:

This SBOE races is not about me. It never was about me! The Establishment’s struggle to remain in complete control is what we are dealing with throughout all levels of government. I entered the SBOE race to shine a light on some things that need to change in our public schools. Cock-roaches and politicians do not like their evil and deceptive actions exposed to the light.

And there you have it. She exits the race in much the same way as she entered it. Bruner lost by 18 points to Ellis on Tuesday exactly because of rhetoric like this, which proved to be too much for Republican voters in District 9.

UPDATE: Bruner has now offered an explanation for why she lost. The gist: It’s all the fault of TFN and the media. Here’s the screenshot: 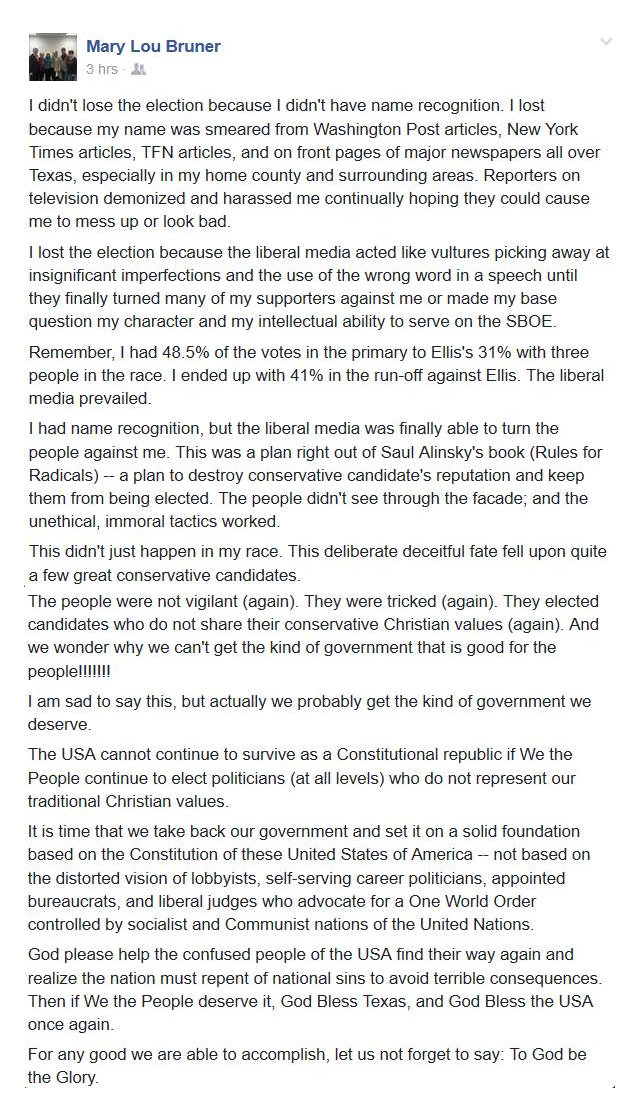