Matt Krause Just Doesn’t Get It

We told you a few days ago how state Rep. Matt Krause, R-Fort Worth, thinks it “doesn’t matter” that the victims massacred in the June 12 mass shooting in Orlando were LGBT. The shooter could have chosen his victims simply because the Pulse nightclub was a “gun free” zone, he absurdly argued. Now Rep. Krause is once again demonstrating that he just doesn’t understand — or simply doesn’t care — why the Orlando attack was so monstrous.

In a Facebook post last night, Krause criticized Fort Worth pastor Donnie Romero for wishing that critically wounded LGBT victims in the Orlando shooting will die (along with the 49 who died the night of the attack) so that they can burn in the flames of hell. Krause calls that “disgusting and deplorable,” but read why he thinks so: 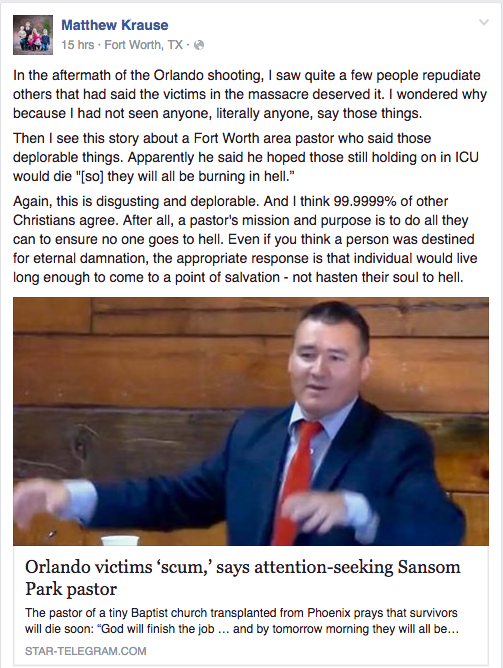 “Apparently he said he hoped those still holding on in ICU would die ‘[so] they will all be burning in hell.’ Again, this is disgusting and deplorable. And I think 99.9999% of other Christians agree. After all, a pastor’s mission and purpose is to do all they can to ensure no one goes to hell. Even if you think a person was destined for eternal damnation, the appropriate response is that individual would live long enough to come to a point of salvation – not hasten their soul to hell.”

Krause is upset not so much because Romero gleefully celebrates the hate-motivated murder of dozens of innocent human beings simply because of who they were. He doesn’t seem bothered by how Romero’s words tear into the hearts of those who lost family and friends in the slaughter. No, what really upsets Krause is that Romero is missing an opportunity to persuade the victims how to avoid burning in hell.

Remember this next year when Krause promotes his proposed state constitutional amendment allowing individuals and businesses to use religion to discriminate against LGBT people — to fire them from their jobs, evict them from their homes, and deny them public services that other people take for granted.