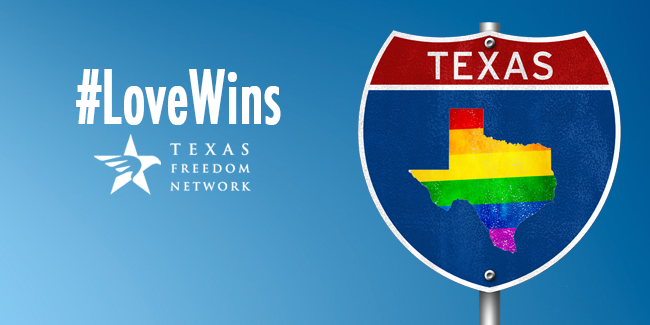 One year ago today, the U.S. Supreme Court, by a 5-4 vote, ruled that same-sex couples have a fundamental right to marry. The ruling legalized marriage for all in the states where it wasn’t already allowed, including Texas.

Same-sex marriage in Texas has been fiercely opposed by far-right politicians and religious-right groups both before and after it became legal. Texas, in fact, was one of the states that banned same-sex marriage by passing a state constitutional amendment against it.

1. Hotze: If same-sex marriage is legalized, its opponents face prosecution.

Steven Hotze, the anti-LGBT activist from Houston, warned that same-sex marriage opponents would be prosecuted for hate speech:

“If the Texas Marriage Amendment is overturned permanently, then every Texas citizen, every church and business would be coerced and compelled to recognize and affirm homosexuality and other deviant sexual relationships as morally and legally equivalent to marriage. If this occurs then anyone who speaks out against homosexuality and deviant sexual relationships will be prosecuted for hate speech and hate crimes, violating the Constitutional rights of the majority to their freedom of speech and freedom of religion.”

A Year Later
Since the marriage ruling, Hotze helped bankroll a successful fight against the Houston Equal Rights Ordinance, waved a sword at a crowd while pledging to drive gay people out of Houston, and has been tweeting about the health benefits of Kefir milk. Clearly, his First Amendment right to free speech remains safe.

In 2014, 63 Texas legislators signed a court brief that used a slippery slope argument that legalizing same-sex marriage would mean polygamy and incest would be up next for legalization. From the brief:

“The district court broadened the definition of the ‘existing right to marry’ as one that includes the right of people to ‘select the partners of their choosing’ for marriage, without regard to sex. If the right to select ‘partners of their choosing’ is the criterion used to invoke marriage as a fundamental right, then marriage restrictions on age, polygamy, and consanguinity are also ripe for challenge.”

3. Gohmert: This is how Nazi Germany got started.

Texas Congressman Louie Gohmert pretty much said he and other same-sex marriage opponents would wind up in concentration camps:

“So it is amazing that in the name of liberality, in the name of being tolerant, this fascist intolerance has arisen. People that stand up and say, you know, I agree with the majority of Americans, I agree with Moses and Jesus that marriage was a man and a woman, now all of a sudden, people like me are considered haters, hate mongers, evil, which really is exactly what we’ve seen throughout our history as going back to the days of the Nazi takeover in Europe. What did they do? First, they would call people “haters” and “evil” and build up disdain for those people who held those opinions or religious views or religious heritage. And then the next came, well, those people are so evil and hateful, let’s bring every book that they’ve written or has to do with them and let’s start burning the books, because we can’t tolerate their intolerance.”

A Year Later
Not only is Gohmert not in a concentration camp, but there he was just this week on the floor of the House of Representatives screaming at his colleagues. So, as with Hotze, it’s safe to say Gohmert’s free speech rights also remain intact.

A Year Later
Putting Abbott’s flimsy logic aside, it’s safe to say the birth rate in Texas is doing just fine. Have you seen all the baby pics in your Facebook feed? Also, birth stats since the marriage ruling are not yet available, but the birth rate has been on an upward trajectory and will keep going unless all these people suddenly decide to stop procreating because two men or two women can now marry.

5. Patrick: Texas will turn into California

When attacking then-Houston Mayor Annise Parker for going to California to marry her partner (this was before the same-sex marriage ruling), Lt. Gov. Dan Patrick, then a state senator, said this:

“I am not shocked that Mayor Parker decided to elope to California for a marriage that is unconstitutional in Texas. This is obviously part of a larger strategy of hers to turn Texas into California.”

A Year Later
Have you seen how red the state after each Congressional election? Texas is far from turning into California. Parker has since left office, she is still married to her partner and — as far as we know — has no plans to transform Texas into California.

BONUS: Clergy will be forced to perform marriage ceremonies for same-sex couples

Despite the fact that clergy members have a right under the First Amendment to refuse to perform a ceremony that violates their faith, religious-right activists swore up and down that if the freedom to marry became the law of the land, clergy members would be forced to do just that.

Our friends at Americans United for Separation of Church and State have set up this handy website that tracks the number of clergy forced to perform same-sex marriages against their will.