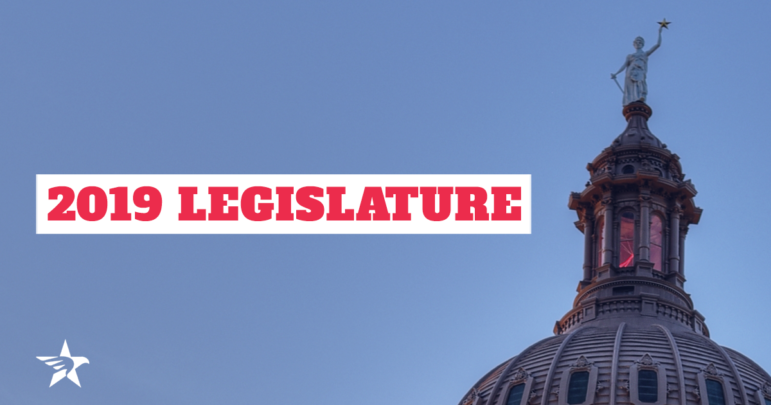 The 86th session of the Texas Legislature is history. Lawmakers left town on Monday following a session that, generally speaking, had fewer of the culture war fights we’ve come to expect. You can attribute that to elections, and it seems the results of last November have elected officials worried about their fates at the ballot box in November of 2020.

Still, on certain issues — like abortion — lawmakers seem all-too willing to continue to pass extremist laws based on lies at the expense of Texas women.

Here’s our overview of what came of this session on the issues we followed.

Lawmakers filed at least 15 bills that use religion as the justification for discrimination, almost all of them targeting LGBTQ Texans.

Sent to the governor was a version of the so-called “Chick-fil-A bill” that was stripped of its most troubling provisions. Still, it was unfortunate that lawmakers were willing to adopt a measure that had animus against LGBTQ people as its foundation.

The rest of the bills failed to pass, and we saw nothing like last session’s bathroom bill gain any traction. In large part, that was because of effective opposition from a coalition of groups supporting equality, including TFN, Equality Texas, Transgender Education Network of Texas, ACLU of Texas and the Human Rights Campaign. In addition, House members and the powerful business interests were unwilling to hop on Lt. Gov. Dan Patrick’s LGBTQ-bashing train (more on that in a bit).

This session alone there were more than 30 bills filed that sought to restrict Texans’ access to reproductive health care.

Three out of more than 30 might not seem all that bad. But the three that passed are awful and based on lies.

Nothing showed just how extreme the Legislature continues to be on this issue than another action by Rep. Leach, who allowed a committee he leads to hear a bill that made women who have an abortion subject to the death penalty. The bill never made it out of committee, but what resulted was an hours-long hearing featuring a parade of extremists demanding women who have an abortion be executed.

In the coming months, TFN and our partners in the Trust Respect Access coalition supporting reproductive rights and justice will continue to call out lawmakers who try to turn anti-abortion lies into laws. You can join our campaign at tfn.org/liesintolaws.

When Austin and San Antonio passed ordinances last year requiring businesses give their workers the opportunity to earn paid sick time, lawmakers vowed to overturn those ordinances and block all futures ones. Then the Dallas City Council passed an earned paid sick ordinance during the legislative session.

Senate Bill 15 by state Sen. Brandon Creighton, R-Conroe, would have blocked the ordinances. The bill, however, also included language that protected local nondiscrimination ordinances for LGBTQ people. But when nondiscrimination language was suddenly removed, SB 15 became a double-whammy that threatened paid sick and left LGBTQ Texans vulnerable to discrimination. That was enough to stall the bill and create additional opposition to it, especially from businesses that oppose discrimination. Out of desperation, SB 15 was split into four bills, but it was too little, too late. When the final gavel fell, SB 15 and the four bills it spawned were all dead.

According to news reports, the nondiscrimination language was removed at Lt. Gov. Patrick’s insistence and at the request of the anti-LGBTQ group Texas Values. If such is the case, a big thanks for the assist goes out to Lt. Gov. Patrick and Texas Values. Finally, your disdain for LGBTQ Texans is good for something. But this win for working families also came because of the work of a broad coalition that included TFN, Workers Defense, Center for Public Policy Priorities, AFL-CIO and others.

We’re sorry to say that the Legislature, once again, did nothing to encourage Texans to vote and make access to the ballot box easier. But, true to form, the Legislature did try to make it harder.

Senate Bill 9 by state Sen. Bryan Hughes, R-Mineola, was perhaps the worst voter suppression bill in the country. It criminalized honest mistakes made while registering to vote and created new bureaucratic paperwork for Texans who help disabled folks and others get to the polls and vote.

Also, the session began with Secretary of State David Whitley distributing a list of 100,000 people who were allegedly suspected of voting illegally. The list turned out to be bogus, the state got sued and the list was rescinded.

Result: SB 9 is dead and Whitley is out

The response and opposition to SB 9 was overwhelming. TFN and our youth program, Texas Rising, were proud to be a part of a broad coalition of voting rights organizations in fighting back. While the cleared the Senate, it died in committee on the House side.

As for Whitley, his blunder and willingness to perpetuate a false narrative about voter fraud — a narrative that even President Trump helped perpetuate — cost him his job. Less than hour before the Senate adjourned, Whitley resigned. The Senate looked unlikely to take up his nomination, so Whitley would have been out anyway at the end of the session.

Whitley’s resignation was a result of Democratic senators, who had enough votes to block him, simply refusing to reward Whitley’s voter suppression scheme.

Private school voucher schemes that funnel tax dollars to private and religious schools have for a long time been on the wish list of Gov. Abbott, Lt. Gov. Patrick and others.

Result: They didn’t even try it

For the first time in decades, there was no serious effort pass a private school voucher scheme this session. Texas remains a voucher-free state — thanks to the hard work of our partners in the Coalition for Public Schools.