1:15 – The State Board of Education (SBOE) has begun the second and final public hearing on social studies textbooks up for adoption for Texas public schools. MerryLynn Gerstenschlager from Texas Eagle Forum is up now. She just criticized textbooks for not making sure students learn about the “debate” over climate change. She argues that climate change science is part of a United Nations conspiracy to redistribute wealth globally.

1:18 – SBOE member Ken Mercer, R-San Antonio, insists that students should learn “the other side” of the debate. If he wants students to learn the other side of the political debate, that’s one thing. But the IPCC has made clear that the overwhelming scientific evidence shows climate change is a real and growing threat and that human activity is the primary driver.

1:23 – Joanathan Kaplan, who teaches Middle Eastern studies at the University of Texas at Austin, is critical of textbooks that present Moses as a major influence on the American founding, and he explains that it is a “gross exaggeration” for textbooks to suggest that the the roots of democratic political and legal traditions lie in the Old Testament.

1:29 – SBOE Chair Barbara Cargill, R-The Woodlands, says people who say the SBOE wants Moses identified as a “founding father” are “ignorant.” So disingenuous. In fact, no one has said the SBOE wanted textbooks to teach that. But scholars and others have pointed out that the textbooks and the curriculum standards would mislead students to think that Moses was a major influence. One scholar has joked that students could end up mistaking Moses as the “first American.”

1:39 – Retired teacher Anthony Bruner warns that communists have tried to use the schools to indoctrinate students and undermine America. Among the tactics, he says, is not to teach students real American history. That doesn’t include, he says, history according to liberals, teacher groups and unions. OK, then.

1:51 – Next speaker, Karin Gililland, is also upset that with textbooks that don’t describe the United States as a republic. And she’s off into a lecture about why America is a republic, not a democracy.

1:57 – Now Cargill is on the “republic” bandwagon. She counted all times the curriculum standards say “constitutional republic.”

1:59 – Speaker Emile McBurney is up and has launched an attack on Common Core curriculum and complains that one of the publishers based its textbook on Common Core. She then links Common Core to teaching students about sexual perversion (or something). It’s hard to follow conspiracy theorists. So many dots to connect.

2:33 – After a long discussion about Common Core, Prof. Jennifer Graber from the University of Texas is testifying about the exaggerations of religious influences (Moses! Old Testament! King Solomon!) on the founding. She is delivering a letter signed by 53 historians, political scientists and other scholars from around the country who object to the inaccurate information on this issue in the texts. You can read the letter here.

2:45 – Barbara Lamontagne just spoke. She complained that one of the textbooks called General Douglas MccArthur a racist. But then she says she couldn’t get access to the textbooks to read them. So how does she know what they say about MacArthur?

2:50 – Roy White, chairman of Truth in Texas Textbooks (TTT), is up to speak now. TTT appears to be loosely affiliated with ACT! for America, an extremist, anti-Muslim organization. White is upset that one of the publishers agreed to change a textbook passage so that it teaches (accurately) that Islam over time spread through trade and missionary work, in addition to (particularly in its early years) conquest. White says Islam was spread “almost exclusively by the sword.” That’s simply not true. White is now on to a rant about the need for students to “learn the facts about Islam.” Good grief — now he suggests that there were no Jews and Christians left living where Islam spread in its early years. Not true. He suggests that the Quran instructs Muslims to be extremists. And now he’s on to Islam being a political system, not a religion.

3:18 – Roy White is still speaking and claims that his reviewers found 1,507 errors in the textbooks. That’s absurd. Many of those “errors” are claims like evolution is “bunk.”  Dr. David Brockman, who teaches religious studies at SMU in Dallas and reviewed the textbooks for the Texas Freedom Network Education Fund, analyzed the Truth in Texas Textbooks reviews for us. You can read his analysis at www.tfn.org/history. 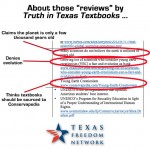 3:22 – In answer to a question about his expertise on Islam, White says he’s self-taught. Indeed.

3:25 – White says he was trained in how to review textbooks by Neal Frey! Frey runs Educational Research Analysts, which was founded by the late Mel and Norma Gabler in Longview out in East Texas. The Gablers were the royalty of right-wing censorship. Frey was their apprentice.

3:33 – Now White is suggesting that the Crusaders slaughtered Muslims and Jews when they invaded the Holy Land in the Middle Ages because they were just trying to save Christians who lived there.

3:43 – SBOE member Mercer claims someone says the board made Moses a founding father. In fact, no one has said that, Mr. Mercer. What scholars have suggested is that textbooks so wildly exaggerate the so-called influence of Moses that students might be forgiven for coming away with the impression that the old fellow sat with Ben Franklin at the Constitutional Convention.

3:57 – Amy Jo Baker, a retired teacher who reviewed textbooks for Truth in Texas Textbooks, is up now. She’s complaining that the textbooks don’t define jihad correctly. She argues that jihad is about using war to spread Islam. We wonder how she became an expert on Islam.

4:09 – SBOE member Lawrence Allen, D-Fresno, who actually is Muslim, is trying to explain to Baker what jihad means. But Baker suggests that she knows Islam better than he does.

4:26 – Now we have Jonathan Saenz from the right-wing, anti-gay lobby group Texas Values. He hasn’t bothered to show up at recent SBOE meetings. He’s upset that concerns over absurd suggestions in the textbooks that Moses influenced the Constitution are efforts to deny the importance of religion in American history. And he suggests that the Ten Commandments posted in government buildings, including the Supreme Court, demonstrate Moses’ influence. But no one argues that Moses hasn’t been an influential religious figure for Jews and Christians or that religion hasn’t been influential in American history. Religion has had a powerful cultural influence in American history. The question is whether Moses influenced the Constitution. He did not, and scholar after scholar has pointed this out. And let’s remember that John Adams, in an 1825 letter to Thomas Jefferson, was clear in rejecting the notion that the Ten Commandments influenced the Constitution.

4:34 – Saenz references his work in Houston to support religious freedom. What he means, of course, is the freedom to discriminate — to fire or deny public services to someone — based on one’s personal religious beliefs.

Adams favored the figure of Hercules, contemplating images of Virtue and Sloth, but admitted this was “too complicated a group for a seal or medal, and it is not original.”

Franklin produced a biblical scheme: “Moses standing on the Shore, extending his Hand over the Sea, thereby causing the same to overwhelm Pharaoh who is sitting in an open Chariot, a Crown on his Head and a Sword in his Hand. Rays from a Pillar of Fire in the Clouds, reaching to Moses, to express that he acts by Command of the Deity.”

Jefferson’s ideas were similar to Franklin’s. But in addition to the emblem of Moses and Pharaoh, Jefferson proposed, on the reverse, “Hengist and Horsa, the Saxon chiefs from whom we claim the honor of being descended, and whose political principles and form of government we have assumed.“

Note whom Jefferson credited for our “political principles and form of government.” It wasn’t Moses.

4:42 – Zack Kopplin is up speaking on behalf of Americans United for Separation of Church and State, presenting petitions with 40,000 signatures from individuals calling for textbooks that teach honest history about, among other things, religious influences in American history.

5:12 – The public hearing is over. After a break, the board is now discussing the adoption of the textbooks.

5:35 – The discussion going on right now illustrates the absurdity of how Texas politicians adopt textbooks for 5 million public school students. Texas Education Agency staff just distributed to SBOE members lists of factual errors alleged by people in the general public, including the anti-Muslim fanatics at Truth in Texas Textbooks. TEA staff members say publishers are still sending in responses to those claims of factual errors, including whatever changes (if any) the publishers are suggesting they will make. Yet board members plan to take a first vote on which textbooks to adopt tonight — without knowing what all those changes might be. How can SBOE members vote on textbooks when they don’t know what changes publishers will make to address the alleged factual errors? And how will SBOE members — few of whom are educators much less content experts — know whether these really are factual errors and that publisher changes really correct those errors? Perhaps asking scholars would help — something TFN has recommended for years. But that clearly makes too much sense.

6:04 – The SBOE is plodding through various awkwardly worded and confusing motions. The preliminary vote on which textbooks to approve is coming.

7:56 – We’re playing catchup here. The SBOE meeting ended a little while ago, and we’ve been talking with board members. We sent out the following press statement:

This evening the State Board of Education failed to take to give preliminary approval to proposed new social studies textbooks for Texas public schools. A number of board members expressed reluctance to give that preliminary approval until they have examined all changes publishers are proposing to their textbooks. The board can still adopt the textbooks on Friday.

Texas Freedom Network President Kathy Miller has the following comments following today’s public hearing and preliminary vote by the State Board of Education:

“It wouldn’t be a Texas textbook adoption without a flurry of last-minute objections from board members and political activists without any expertise on the subject at hand. On issues like bashing Islam and questioning the existence of global warming, we heard a lot of personal and political opinions but no actual facts that would justify revising what the textbooks currently say on those subjects.”

Publishers will be submitting addition changes to their textbooks over the next two days, leading up to the final vote on Friday.