TFN has taken up its usual post in the board hearing room at the State Board of Education, where we will be bringing you up-to-the-minute action from today’s one and only hearing on proposed new science instructional materials. (We’re also live-tweeting at #sboe.) For anyone who wants to watch the proceedings, the meeting will be live-streamed here. The board is scheduled to convene at 10:00, and public testimony on science is #4 on the agenda.

For a primer on what’s at stake today, you can view an archive of TFN Insider posts on the science debate by clicking here.

10:08 – New board chairwoman Cargill gavels the meeting to order and makes a personal privilege speech promising to lead the board with fairness and integrity. The chair already has some fences to mend with her fellow board members after she was captured on video two weeks ago telling the Texas Eagle Forum that there are only six “true conservative Christians” on the board, comments that offended some on the board.

10:10 – Texas Education Commissioner Robert Scott makes some comments to the board about how decisions made in the just-finished legislative session will affect the board and the agency. There seems to be some change in the works regarding the board’s roll in overseeing the state’s massive Permanent School Fund (the board has been criticized in the past for problems in this area).

10:20  – Board members are quizzing the commissioner about how the new rules governing the purchase of instructional materials — changes codified in Senate Bill 6, passed during the legislative session and signed by the governor earlier this week — will play out in school districts. Commissioner Scott rightly notes that the law represents a sea-change in the way the schools purchase materials. Note: TFN is putting the finishing touches on a comprehensive analysis of this new law and its likely effects on the state board’s role in vetting and approving classroom materials. We plan to publish that analysis in the coming weeks. TFN communications director Dan Quinn previewed our conclusions in a story in today’s USA Today: “It has the great potential to diminish the influence of the State Board of Education.”

10:42 – Board now onto discussion of new technology TEKS. Only a few people are signed up to testify, so this should go pretty quickly. Science materials are up next.

10:48 – Our friend Steven Schafersman from Texas Citizens for Science is also live blogging the science hearing at his Texas Observer blog. Open up a new browser tab and follow Steve’s commentary as well.

11:00 – TFN just completed a press conference in the lobby — a big crowd of television, radio and print reporters crowded around to hear remarks from a decorated university scientist, a successful entrepreneur, a representative from our friends at the National Center for Science Education and, of course, TFN President Kathy Miller. The group all told the board to follow the recommendations from the science review panels and adopt materials that do not water down instruction on evolution. (Thanks to Steve Schafersman for the photo below.) 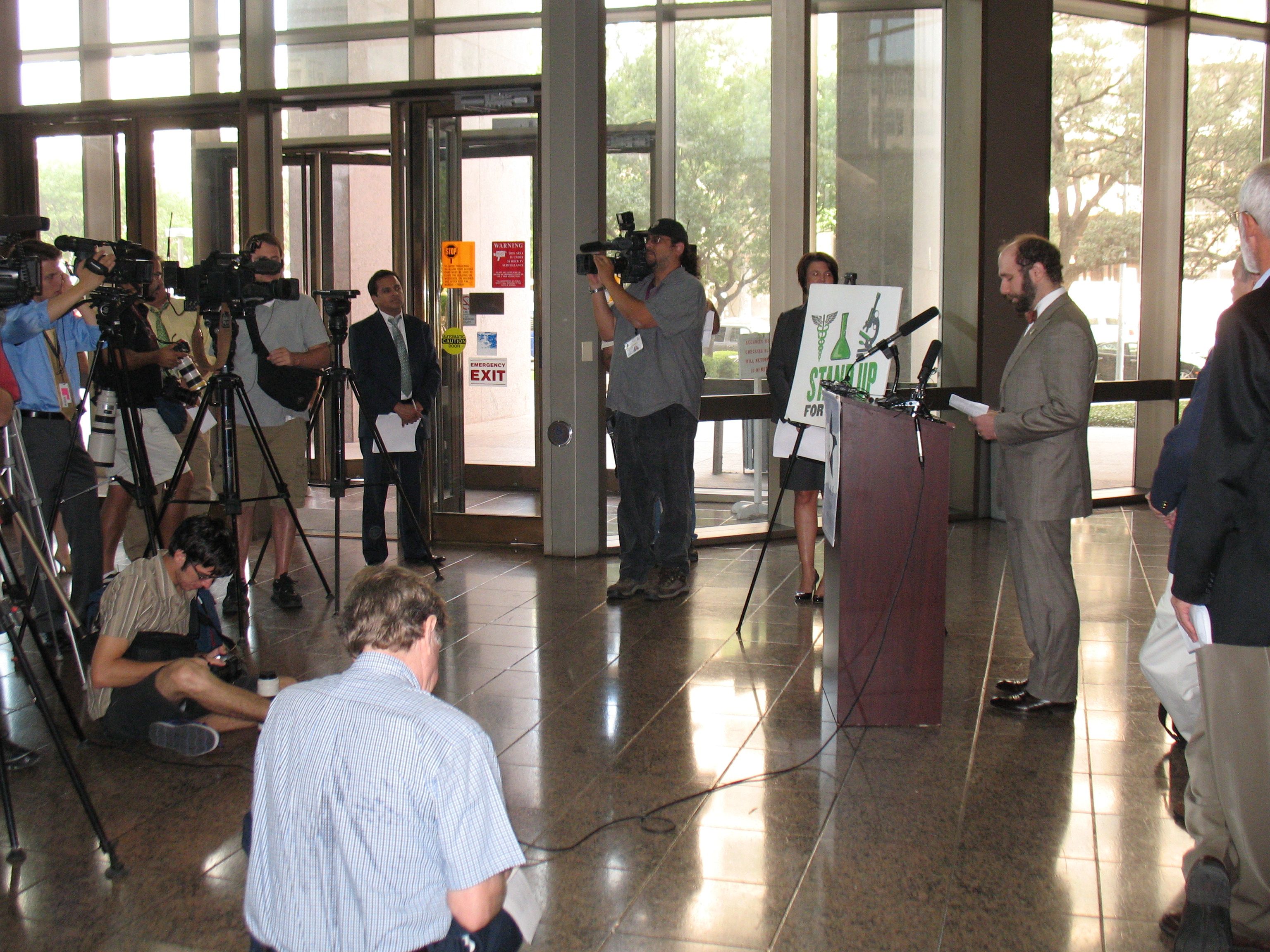 11:20 – Interesting news out of the SBOE Committee on Instruction meeting earlier this morning. That five-member committee has long been dominated by far-right members, but there are signs that a change is coming. The committee’s first order of business today was to elect a new chair, after Barbara Cargill announced she was stepping down. In a move that seemed to surprise Cargill, George Clayton, R-Dallas, nominated new board member Marsha Farney, R-Georgetown, as chair. Clayton and Farney, though conservative, have been ostracized by Cargill and the far-right faction. Cargill immediately nominated fellow far-right conservative Terri Leo, R-Spring, and the vote was deadlocked at two votes for each candidate. Democratic board member Mary Helen Berlanga, D-Corpus Christi, is absent from today’s meetings, so the committee moved to postpone the election of chair until the September meeting when Berlanga will be present. Since there is no love lost between Berlanga and the far-right bloc, it seems likely that she will vote for Farney at the September meeting. Could this be a coup, signaling a return to common sense on this critical committee?

11:45 – After voting to pass the new Technology TEKS, the board has decided to break for lunch before starting the science testimony. They will reconvene at 12:50. Stay tuned.

One thought on “Live-Blogging the SBOE Science Hearing I”