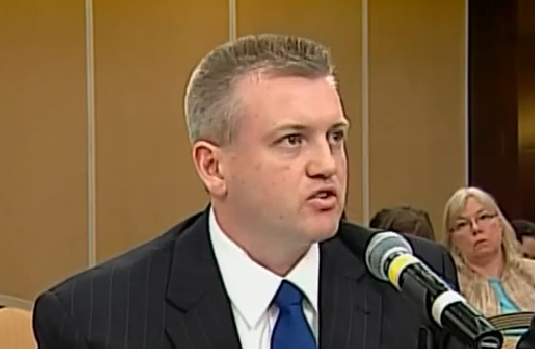 Texas Freedom Network President Kathy Miller warned today that Texas Attorney General Ken Paxton is further politicizing the state’s chief law enforcement agency with the appointment of yet another prominent culture warrior to a top staff position in his office.

“Texans should be concerned by the attorney general’s deliberate effort to politicize the state’s chief office tasked with defending our laws and Constitution,” Miller said. “Within the course of just one month, he has appointed to top leadership positions culture warriors who have dedicated their careers to defending the use religion as a weapon to discriminate against and harm others.”

Miller made her comments following news of the hiring of Hiram Sasser (pictured here) as Paxton’s chief of staff at the Attorney General’s Office. Sasser has been serving as the deputy chief counsel for First Liberty Institute, a Plano-based litigation firm that is hostile to church-state separation and anti-discrimination protections for gay and transgender people.

Especially in recent years, First Liberty has also argued that businesses and individuals, including public officials, have the right to use religion to discriminate against gay and transgender people.

Last year the group’s attorneys represented Katie Lang, the Hood County Clerk in North Texas. Lang had refused to issue marriage licenses to same-sex couples after the U.S. Supreme Court’s ruling striking down bans on such unions. County taxpayers were later forced to pay nearly $44,000 in attorney fees for a couple that sued over Lang’s refusal to do her job.

Following the Supreme Court marriage ruling last June, Paxton had released a statement suggesting that government officials who chose, because of their religious beliefs, not to issue marriage licenses to same-sex couples would find “numerous lawyers … ready to assist” them.

Paxton has also urged legislative leaders to pass laws protecting the decision of individuals, businesses and government officials to use religion as cover for discriminating against gay and transgender people.

“It’s clear that the attorney general has decided to pack his office with ideologues who share his obsession with defending discrimination,” Miller said. “Doing so sends a message that the Attorney General’s Office isn’t interested in protecting the equality of all Texans under the law.”