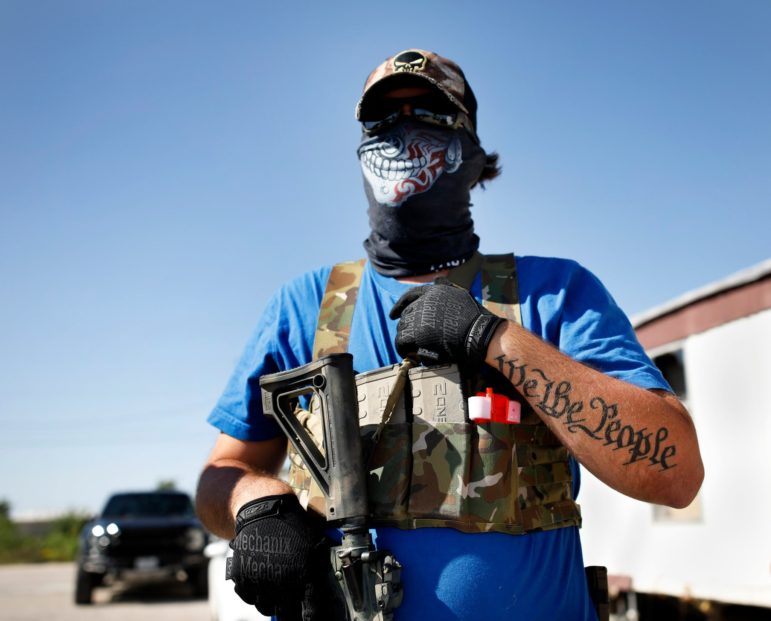 Gun extremists are threatening violence over public health orders during the COVID-19 pandemic. But what are Republican Texas officials doing about it? Nothing.

The New York Times has a distressing piece about how armed, self-styled militias are showing up to “protect” Texas businesses that defy public health orders to remain closed to slow the spread of COVID-19. (Photo credit: Eli Hartman/Odessa American) Gov. Abbott has already been pulling back on those orders, but armed extremists like C.J. Grisham of Open Carry Texas think such orders were illegitimate in the first place. And Grisham, who has become a fixture in Republican politics over the years as he pushes to eliminate restrictions on firearms, is ominously warning that he and others like him could turn to violence:

“We go out there because we want peace, but we prepare for war. I hope this never happens, but at some point guns are going to have to cease to be a show of force and be a response to force.”

The Times also quotes J.P Campbell of Freedom Fighters of Texas, shotgun draped across his chest:

When an Odessa bar reopened in defiance of shutdown orders, the sheriff in the West Texas city arrested the bar owner and a number of armed militia types there to “protect” him. The sheriff then got death threats for doing his job. That left him wondering: “Why put forth to law enforcement to enforce these orders if you’re not going to have the backbone to stand up and back up what you’ve ordered?”

Good question. Gov. Abbott has been caving to extremists, moving to lift lockdown orders even as public health experts warn that the state hasn’t put in place necessary measures to prevent COVID-19 cases from spiking and overwhelming Texas hospitals. He rushed to defend a Dallas salon owner who defied his executive order by staying open. And he won’t even allow local officials to require people to wear face masks when in public. Attorney General Ken Paxton — himself under indictment the past five year on felony charges involving private business dealings — has even threatened officials in Austin, Dallas and San Antonio that he may take legal action if they don’t weaken their local public health orders.

But what are they doing about gun extremists making dark threats about turning to violence to end public health orders protecting Texas families from the pandemic? As we said, nothing. They’re looking the other way.

Texas needs elected leaders who put public health ahead of politics and pandering to extremists. Remember that in November and in 2022. Elections matter.