In the World of Cathie Adams, Union Workers Getting Out the Vote Are ‘Thugs’

Cathie Adams, head of the far-right Texas Eagle Forum, is in Ohio with other conservative evangelical activists to help get Republican voters to the polls in Tuesday’s presidential election. But in her parallel universe, in which democracy apparently is a one-way street, activists working to get out the vote among Democrats are little more than “thugs.” 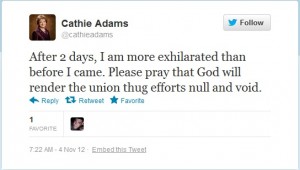 “After 2 days, I am more exhilarated than before I came. Please pray that God will render the union thug efforts null and void. “