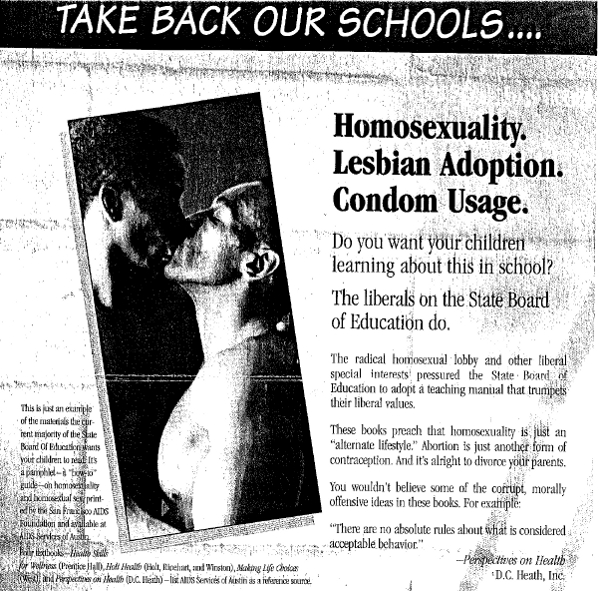 If history is any judge, next year’s Texas State Board of Education elections could get very nasty. The image at left (click to enlarge) comes from a campaign flyer supporting Randy Stevenson in his successful election race for the board in 1994:

“Homosexuality. Lesbian Adoption. Condom Usage. Do you want your children learning about this in school? The liberals on the State Board of Education do.”

Almost identical flyers supported other religious-right candidates the same year, with the names of candidates swapped out on each one.

Stevenson, a Tyler resident who left the board after the 1998 elections, is challenging board incumbent Thomas Ratliff of Mount Pleasant in the Republican primary in March of next year. Ratliff defeated religious-right board member Don McLeroy in the 2010 GOP primary.

The 1994 elections that first brought Stevenson to the board came as board members debated proposed new high school health textbooks. Religious-righters demanded that the board reject textbooks they said promoted contraception and homosexuality and included other information they found objectionable. They even called for removing line-drawings of self-exams for testicular and breast cancer (too suggestive) and for replacing a photo of a woman carrying a briefcase with one showing a woman baking a cake (traditional gender role).

San Antonio businessman James Leininger, the religious right’s sugar daddy in Texas, poured boatloads of money into the effort to defeat board incumbents who didn’t bow to those demands. Much of the money funded deceitful and incendiary attacks like those on the flyer above. It was “horrible garbage,” one of the targeted (and defeated) incumbents told the Houston Press. It was also, the Press reported, “a bundle of lies and distortions”:

To cite one prominent example, the brochure cited the picture of the two men kissing as being found in an informational pamphlet published by the San Francisco AIDS Foundation and also available through AIDS Services of Austin. And the mailing strongly suggested that AIDS Service of Austin was listed as a reference source in health textbooks used by Texas students. But the fact is that none of the four health textbooks that were adopted by the board earlier this year contained mention of any AIDS service organizations or hot lines, although the teachers’ manuals for a couple of the textbooks included a recommended student activity that involved contacting unspecified local AIDS organizations in their communities.

Will Stevenson use the same political trash in his bid to return to the State Board of Education? Will other candidates do so as religious-right pressure groups try to expand their corrosive influence over the education of millions of kids in Texas public schools? We’re already seeing a whisper campaign that has left one Republican board incumbent feeling compelled to acknowledge that he is gay. We fear things will only get worse.

TFN wasn’t around in 1994. But next year we will work tirelessly to expose these kinds of smear campaigns. We will shine a bright light on the extremists who use these rancid campaign tactics to push their divisive and destructive political agendas into our kids’ classrooms.

You can read the full flyer from Stevenson’s 1994 campaign here.

5 thoughts on “How Nasty Could Texas SBOE Elections Get?”