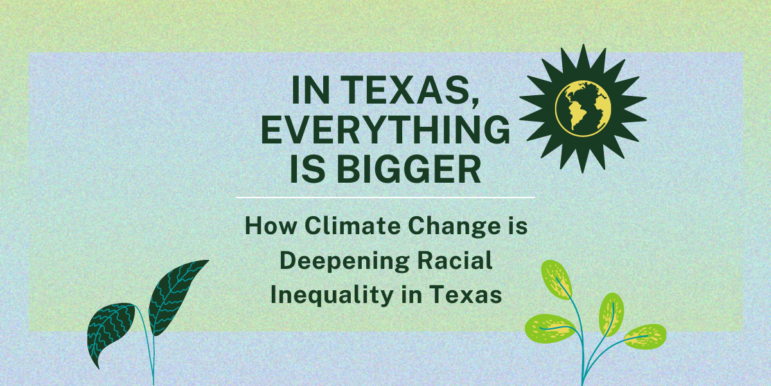 “Global warming is not real because I was cold today. Also, great news, world hunger is over because I just ate.”

It can be tempting to think of big world issues like climate change as invisible events happening elsewhere in the world, beyond our control. We may be interested but slower to act because we rarely attach urgency to these issues. But just as we interact daily with many people, ideas, and concepts, climate change does not live in a little bubble by itself.  When we see how big world issues intersect, like how climate inaction worsens racial inequality, the urgency is apparent.

Climate change is not a problem we’re anticipating; it’s already living with us. And in some communities, its impact is more obvious and harder to ignore. Climate change is affecting the quality of air, the quality and availability of water, the nutrients in the soil, and more. We can all agree that our quality of air, water, and access to safe play spaces should not be determined by our race. In some Texas communities, however, kids can’t play in the sand because decades of contamination have made the ground deadly.

According to a recent ozone report by the EPA, the people who live in four specific Houston area ozone monitor sites  bear a disproportionate ozone pollution burden when compared to the US as a whole – with ozone air quality that is considerably worse than the rest of Houston. It just so happens that these communities are heavily Brown and Black populations.

In 2020, Texas Rising was part of a historic effort to make San Antonio City Council the governing authority of CPS Energy and shut down the Spruce coal plant by 2030, gathering over 14,000 signatures. As one of the largest polluters, not only in San Antonio, but in Texas, the Spruce plant poses a threat to the community near it, made up of eighty percent non-white people. In 2022, those demands remain urgent and deserve the attention of every Texan.

In Corpus, Port Aransas needs our attention. The Port of Corpus Christi has applied to the US Army Corp of Engineers (USACE) for a permit to deepen the Corpus Christi Ship Channel from 54 feet to 80 feet, from Harbor Island to the Gulf of Mexico. If granted, this will allow the Port to dredge potentially toxic spoil and place it on Mustang Island and St. Joe’s beaches. This channel deepening project would affect the lives of 3,000 Port Aransans, by increasing the risks of oil spills, air pollution, flooding, storm surge, silting of seagrass, and also endangering the wildlife surrounding it.

What we Can Change Today

Environmental racism has dictated some of our state’s policies. More accurately, the refusal of the Texas Commission on Environmental Quality (TCEQ) to engage with communities most affected by industrial pollution—often communities of color—means that these communities continue to suffer the most while being largely ignored whenever solutions are proffered. It is not enough that these communities live with ninety percent of the city’s industrial waste, they are also asked to prove their health problems are a direct result of where they live before their claims are even entertained.

Even though redlining policies are no longer as prevalent as in the past, thankfully, we still need to do so much more to help generations of Black and Brown people whose lives and families have been devastated by decades of these policies. These communities are often considered the frontlines by environmental experts because they live in fatal proximity to these sources of pollution. It’s only fair, then, that they are also front-of-line for governmental compensation and initiatives—whether it’s building health centers to improve medical care access, offering monetary compensation, raising income so families can better protect themselves, building parks and nature areas and increasing community access to green spaces.

We also need elected officials to defend vulnerable constituencies against illegal dumping, especially as we know where this is likely to be allowed to happen. We can ask our council leaders and elected officials to create safe buffer zones between industrial sites and nearby neighborhoods. No part of our cities where people live, no matter the color of their skin or how much money they make, should be pollution-incentivized. We all deserve to live in safe, healthy communities where our families can thrive and we feel more like contributing members of the society.

Finally, we can’t fully address these issues without recognizing that some members of our society suffer an unfair share of climate change burdens due to already existing racially-designed inequalities. For instance, when the pandemic made working from home compulsory for most people, many in Houston communities dreaded the implication of never leaving their homes. What was a relief for most of the working population was actually fear of the atmospheric unknown for the people in these communities.

Thankfully, we’re already seeing community organizing efforts bear fruit, like the Department of Justice launching an investigation into decades of environmental racism in Houston recently. But there’s so much more left to do in our various communities. These issues will remain with us and continue to intersect until we recognize that and provide solutions that respond to that intersectionality. After all, as Audre Lorde once said, “There is no [thing as a] single-issue struggle because we do not live single-issue lives.”

Interested in Climate Justice work? Texas Rising, a project of TFN, works throughout the state of Texas on climate justice issues that directly affect our community. Sign up to receive updates on their work.

To learn more about which vulnerable communities are exposed to climate injustice, visit our environmental justice explorer to see if your community is exposed to possible health risks from pollution and climate change. And remember, climate change is a now problem, with your action, we can make our world liveable again.