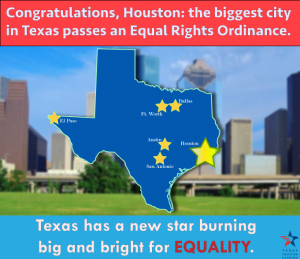 The Houston City Council, by a vote of 11-6, has just passed the Houston Equal Rights Ordinance (HERO), which bars discrimination based on race, sex, religion, sexual orientation, gender identity and military status, among other characteristics, in employment, housing and public accommodations. Houston now joins Dallas, San Antonio, Austin, Fort Worth and El Paso in adopting such broad civil rights protections for all.

Passage of the HERO came despite a divisive and deceitful campaign by religious-right groups and activists to stop it. That campaign promoted fear, myths, distortions and even personal attacks against Mayor Annise Parker. Opponents denounced LGBT people as evil and shamefully claimed the ordinance would allow sexual predators into women’s restrooms. They also argued that the ordinance threatens their religious freedom — the freedom, that is, to discriminate against people they don’t like. At one point a Houston pastor who opposed the HERO even insisted that religious freedom allows a businessperson or anyone else to discriminate against anyone, including Jews as well as LGBT people.

In the end, however, a broad coalition of grassroots organizations, including Equality Texas, Texans Together, the ACLU of Texas and the Texas Freedom Network, working behind the courageous leadership of Mayor Parker, Council Member Ellen Cohen and religious leaders across Houston, made sure that equality won and demonstrated to the rest of the country that Houston doesn’t discriminate.

Opponents are threatening to overturn the ordinance in a public referendum this fall. But TFN and our coalition partners will work just as hard to defeat that referendum as we did to win passage of the HERO.

Now, however, is the time to celebrate a big victory for equality in Texas.