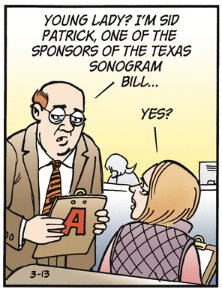 In the wake of this week’s silly spat over the Doonesbury series of comic strips depicting a woman undergoing a state-forced transvaginal sonogram before getting a completely legal medical procedure, Huckabee called out Doonesbury author Garry Trudeau for not checking his facts. In doing so, Huckabee ironically failed to check his facts and instead relied on — of all people — far-right Texas state Sen. Dan Patrick, R-Houston, for his information.

The controversy originates with Texas’ forced sonogram legislation, signed into law last year by Gov. Rick Perry and co-authored by Sen. Patrick and state Rep. Sid Miller, R-Stephenville. It requires a woman seeking in abortion be forced to undergo a sonogram, have the fetus described and wait 24 hours after the sonogram before the abortion.

The law has been targeted for ridicule in this week’s Doonesbury strips.

Says Huckabee, after receiving a note from Patrick:

“Sen. Patrick notes that the bill does not stipulate the type of sonogram required. It could be a simple belly rub sonogram. So claiming that the law requires an invasive procedure that’s comparable to rape is not only offensive, it’s factually incorrect.”

Huckabee is technically correct, the law does not stipulate what kind of sonogram should be performed. But doctors have said that for pregnancies in their first trimester the only way to get the level of detail required by the law is with a transvaginal sonogram.

For many women the transvaginal option will be the only option. So while both Patrick and Huckabee are correct when they say the transvaginal sonogram is not required explicitly in the law, the reality is that it is required by default.

“So if you’ve been relying on comic strips for your facts about law, politics and medicine, please consider doing a little more research. Because Garry Trudeau apparently didn’t.”

Yes, better to rely on a note from Dan Patrick for your facts.

6 thoughts on “Fox News’ Huckabee: Get Your Facts Straight”