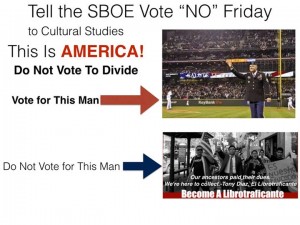 Far-right activists are furious that the State Board of Education on Wednesday moved to make it easier for Texas public schools to offer elective courses in ethnic studies. Now some of those extremists have launched a racially divisive and deeply offensive campaign to stop the board from implementing that plan.

This image from the Facebook page of Voices Empower, a political consulting firm aligned with tea partyers, calls on board members to vote against a preliminary agreement they struck on Wednesday. If the board votes for final approval of that agreement on Friday, the state will ask publishers to submit instructional materials next year for local courses in Mexican-American, African-American, Native American and Asian-American studies. Schools that choose to offer those courses would do so under the state’s Special Topics in Social Studies curriculum standards.

That doesn’t sit well with the extremists at Voices Empower. (Run by Alice Linahan, Voices Empower helped push last year’s anti-CSCOPE witch hunt that portrayed a popular curriculum tool used in hundreds of Texas schools as Marxist, anti-Christian and pro-Muslim. That campaign fizzled when a review sponsored by the State Board of Education found no evidence for those absurd charges.)

“This is AMERICA,” scream’s the firm’s illustration attacking what it calls “Cultural Studies.” An arrow points toward a white soldier above a call for state board members to “Vote for This Man.” Below are the words, “Do Not Vote for This Man,” with an arrow pointing toward a Hispanic activist. The message is hardly subtle: The white soldier is a real American. Brown folks? Not so much.

On the same Facebook page, Voices Empower insists that ethnic studies courses would be divisive, “emphasizing ethnic/racial differences among students.” But advocates have pointed out repeatedly that such courses would simply give students a fuller accounting of  Mexican-Americans, African-Americans and others in our nation’s history and culture.

Mexican-Americans, African-Americans, Native Americans and Asian-Americans are just as American as the white soldier in the firm’s illustration. Many people of color have served their country — America — in uniform, just like him. Many have died doing so. But the contributions they and others like them have made to this country often receive little attention in public school classrooms.

In fact, four years ago state board members debated whether American heroes like Cesar Chavez, Dolores Huerta and Thurgood Marshall should even be included in the state’s social studies curriculum standards. Political activists appointed by the board as “expert advisers” argued that Chavez and Marshall either were poor role models for students or weren’t important enough to include in the standards. They remained in the standards, but the board voted to remove Huerta from a third-grade course.

Now the board is taking an important step toward making it easier for public schools to teach courses on how these Americans and others like them have helped shape our state and nation. Right-wing extremists like those at Voices Empower find that threatening. Shame on them.