The Texas Freedom Network is helping faith leaders organize in support of the Houston Equal Rights Ordinance and its protections against discrimination for all Houstonians. Check out the email that just went out from Fran Watson, Faith Organizer for Houston Unites:

Heads up, Houston: we’ve got some work to do.

As you’ve likely heard by now, the Houston Equal Rights Ordinance — that we worked so hard to pass just a year ago — is in jeopardy. On November 3, we have to win it again — this time at the ballot box. As a faith leader, we need you to speak out in support of HERO. Add your name to the pledge today.

As a native Houstonian who values faith and has a passion for equality, it is heartbreaking to see faith being used as a tool to attack members of our community, which in turn, creates a division that is contrary to what HERO is intended to do: unify the city by providing protections for ALL Houstonians.

That’s why I’m thrilled to come on board with the Texas Freedom Network and the Houston Unites campaign to magnify faith voices in Houston that support equality for everyone. 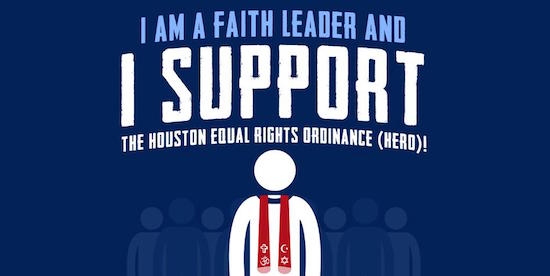 The first thing you can do to help is sign the pledge. After signing the pledge, begin thinking about what your congregation can do or will continue to do to support HERO. Let’s have a conversation about how we can work together to support and ultimately pass HERO.

Just reply to this email and let me know you are ready!

In the spirit of equality,