UPDATE: Sen. Patrick’s website petition about CSCOPE was updated early Friday evening with a partial correction regarding the status of SB 41. By around midnight, however, the petition had disappeared completely from the website.

We have some unsolicited advice for Texas state Sen. Dan Patrick: If you’re going to brag about passing a bill while trying to pander to right-wing voters, it’s probably a good idea to have, well, actually passed that bill.

This afternoon Sen. Patrick’s Twitter and Facebook accounts have touted the passage of SB 41, dubbed the “CSCOPE Termination Bill.” The posts direct readers to an online petition:

“As your Senate Chairman on the Committee on Education, we passed a bill I authored called SB41, bringing an end to the flawed and controversial CSCOPE curriculum. Now there are school officials and legislators who want to go against the will of the people, calling into question the state’s mandate to bring this curriculum to an end. Let them know you want to put and [sic] end to CSCOPE by signing the petition.”

Problem: Sen. Patrick filed SB 41 just two days ago (July 24). Not only hasn’t the Legislature passed the bill, it can’t even take it up because Gov. Perry hasn’t put this issue on the call for the special legislative session.

SB 41 is an effort by Sen. Patrick to pander to Tea Party and other right-wing activists who have absurdly attacked CSCOPE (and the current and retired Texas teachers who wrote its lessons) as Marxist, pro-Islamic, anti-American and anti-Christian. Patrick’s petition follows an anti-CSCOPE petition from his Republican primary opponent, incumbent Lt. Gov. David Dewhurst. 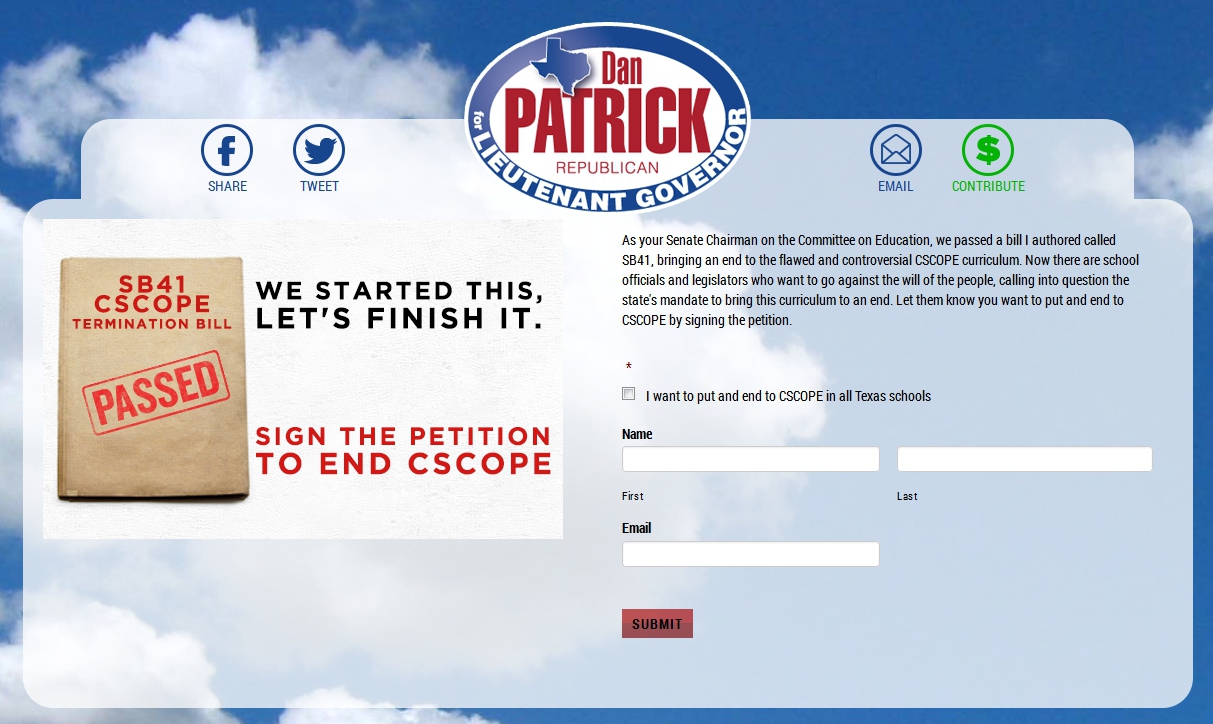