It will be interesting to see what, if anything, religious right leaders have to say about Republican senate candidate Todd Akin of Missouri this morning. That includes David Barton, who a few weeks ago issued a strong endorsement of Akin.

If you had never heard of Akin before this weekend, you probably have now. In a tight battle with incumbent Claire McCaskill, Akin’s bizarre remarks about rape call to mind failed 1990 Texas gubernatorial candidate Clayton Williams. In an interview, Akin said this when asked about abortion in cases of rape:

First of all, from what I understand from doctors [pregnancy from rape] is really rare. If it’s a legitimate rape, the female body has ways to try to shut that whole thing down.

Needless to say, Akin’s comments are outrageous and out of the mainstream. Even the religious right, which has supported Akin, has gone silent. But it was the weekend, so we’ll give them a pass. It’s now Monday, though, and we’ll be watching with bated breath to see what they have to say.

In particular, we’re curious to see what Barton has to say. Earlier this month, with the Missouri Republican primary on the horizon, Barton went all-in on Akin. Here’s the ad, courtesy of our friends at Right Wing Watch.

What does Barton have to say now? We’ll be waiting.

By the way, one religious-righter who can always be counted on to break the silence, Bryan Fischer of the American Family Association, wants you to lighten up. 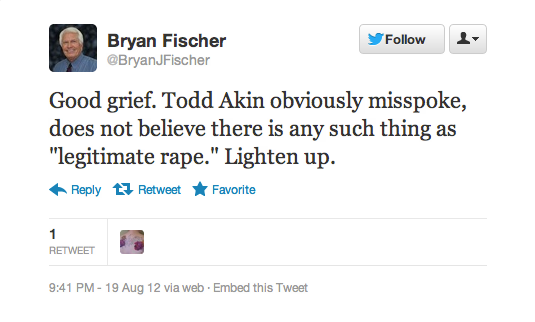