Cynthia Dunbar is upset that scholars don’t like her deeply flawed and outrageously offensive Mexican American Heritage textbook, which the State Board of Education (SBOE) is considering for adoption for Texas public schools this year. So now the right-wing, former SBOE member (and current Donald Trump supporter) is offering a rather absurd defense of the text.

First, Dunbar claims the textbook’s critics have rebuffed her efforts to work with them:

“It would seem like the logical thing would be to call and talk to people calmly and work together instead of doing this horrible hit piece, character assassination.”

We know of no evidence that Dunbar reached out to scholars who on Tuesday released a report identifying at least 141 substantial errors in her 507-page textbook. Other scholars have also noted scores of errors in the textbook. Click here to read the reviews from many of those scholars.

Moreover, even if Dunbar’s claim about reaching out to scholars is true, it’s not their job to fix the problems she created when she hired unqualified individuals to serve as her textbook’s authors. And it’s not “character assassination” to point out that her textbook is riddled with errors and promotes offensive ethnic stereotypes.

But Dunbar also claims that those problems aren’t really problems. She told the Dallas Morning News that the criticism is mostly based on philosophical disagreements. And she again suggested that the attacks on her textbook are unfair and harmful:

“I’m used to them going after me personally, and that’s fine. But I’m not OK with it when the people who get hurt by it are the students and they’re lied to and told there’s a textbook out there calling you lazy when that in fact is not true.”

Actually, the lies and falsehoods are in the textbook, not the scholarly criticism. In fact, the textbook does reinforce the stereotype of supposedly lazy Mexicans. Moreover, the detailed criticism is coming from scholars who have dedicated their careers to studying Mexican-American history and culture.

Bizarrely, Dunbar even told the Dallas Morning News that she didn’t hire Mexican-American scholars as authors because she wanted an unbiased textbook. Seriously? So instead she hired authors who appear to be right-wing ideologues, like herself, and have no expertise in the subject at all? Reputable publishers simply don’t do that.

But Dunbar isn’t a reputable publisher. She’s a political extremist who hates public schools. Remember that while serving on the State Board of Education, Dunbar wrote a book calling public education a “subtly deceptive tool of perversion,” “tyrannical” and unconstitutional.

The bottom line, as scholars have made clear, is Dunbar’s new textbook is so poorly written and so factually inaccurate that it simply is not salvageable. The only way to fix the problems would be to rewrite essentially the entire textbook.

The State Board of Education will hold its first public hearing on the textbook this coming Tuesday, September 13, at the Texas Education Agency building in Austin. Join the Responsible Ethnic Studies Textbook Coalition for a rally in opposition to the textbook that morning. Click here for more information. 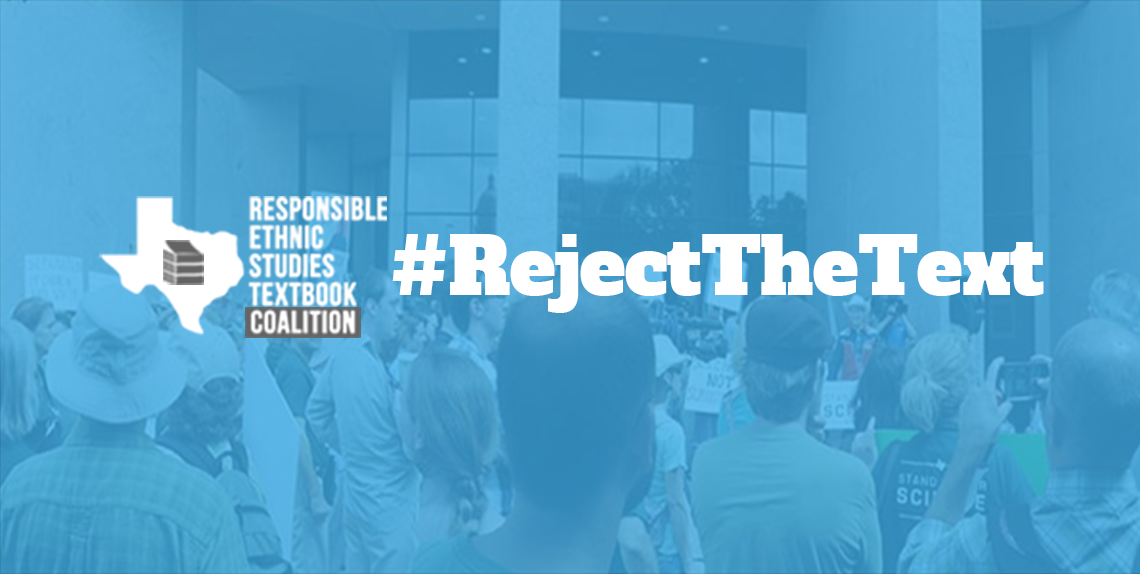