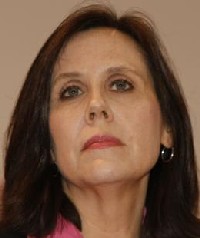 Cynthia Dunbar (left) is defending her reckless and stunning attacks on the public schools she helps govern by playing the victim card. But this tactic only makes her look hypocritical.

As we noted last week, the Republican Texas State Board of Education member from Richmond (west of Houston) has authored a new book, One Nation Under God (Onward, 2008), in which she claims public schools are “tools of perversion,” “tyrannical” and “unconstitutional” because they aren’t supported by Scripture. Last Friday the Houston Chronicle quoted Dunbar as saying the intended audience for her book was “the body of Christ,” not the general public. She also claimed that Christians are unfairly attacked when they speak out on public policy.

I don’t think most people in the churches are aware of the venom against Christian America. So, it’s more of a wake-up call to be informed, to be involved. They are fine with the body of Christ as long as we stay hidden in our four walls of the church, sitting quietly in our pews. But if we become civically involved or active in public policy issues, then we’re going to be shot down.

What nonsense. It’s absurd to suggest that Christians are somehow under siege in a nation in which they make up an overwhelming majority of the population. But Dunbar isn’t really talking about all Christians. She’s talking about her kind of Christian — meaning, Christians who share her brand of radical politics. In fact, she makes it clear in her book that she doesn’t even see other folks as real Christians.

For example, Democrats can’t be Christians in Dunbar’s world.

(W)hat I am saying clearly and unequivocally is that you cannot be a Christian who believes in the Bible as the inerrant Word of God and support the Democratic Party’s platform either directly or indirectly through its candidates. It is simply impossible, for the simple reason that it is impossible to have two masters (Matt. 6:24). (page 24)

Dunbar also insultingly attacks those people she labels as “so-called evangelicals” (especially those under 35) who are increasingly alienated by the religious right’s relentless focus on abortion and homosexuality over nearly all other issues. She ridicules efforts to find common ground between those “so-called evangelicals” and the Democratic Party on issues such as “AIDS in Africa, poverty and social justice.”

Christians who truly possess a biblical worldview would know better than to buy into the lie that the Democratic position on even these issues aligns with Scripture; clearly, it does not.  (pages 3-4)

She also has scorn for Christians who support government aid for the needy — a role for government that she believes is contradictory to the Bible. She says giving civil government a role in aiding the poor is alien to a “biblical worldview” and is “socialistic and even communistic.”

Either the Church in America has become so ignorant of the principles espoused within the Word of God or these “evangelicals” are not really who they say they are. (pages 5-6)

Christians who oppose the death penalty? Cynthia smites them.

It is also disheartening to note the number of people who argue that capital punishment is not Christian. Such people clearly do not know the meaning of the word Christian. (page 73)

That might come as news to the Roman Catholic pope and to countless other Christians who base their opposition to the death penalty on their religious beliefs.

Look, Cynthia Dunbar has every right to her own religious beliefs, but she has no right to use government to promote them over everybody else’s. And let’s make something else very clear. It’s naked hypocrisy when she cries about the “venom against Christian America” while ignoring her own poisonous words directed toward Christians whose political and religious beliefs differ from her own.

24 thoughts on “Cynthia Dunbar and Hypocrisy”