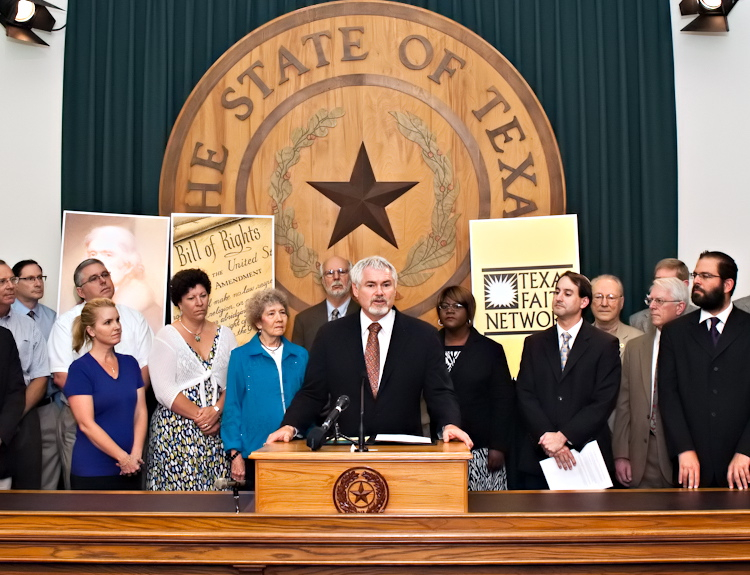 The State Board of Education’s reckless revisions to proposed social studies curriculum standards for Texas public schools have raised serious concerns among classroom teachers and scholars regarding pedagogical issues and historical accuracy. Issues involving religious freedom are also a growing concern, however. In March the board rejected a proposed standard that would have required high school students to study how the Founders barred government from promoting or disfavoring any particular religion. Some board members have suggested, instead, that the Founders actually wanted government to promote religion. They have also expressed strong opposition to separation of church and state.

At a press conference at the Texas Capitol today, a group of about two dozen interfaith clergy called on the state board to stop undermining instruction on religious freedom — including the principle of separation of church and state — in proposed new social studies curriculum standards. The clergy are members of the Texas Faith Network, a project of the Texas Freedom Network Education Fund. The Texas Faith Network includes more than 600 mainstream and progressive clergy from around the state.

An interfaith group of clergy today called on the State Board of Education to stop downplaying constitutional protections for religious freedom in proposed new social studies curriculum standards for Texas public schools.

The board will meet in Austin on May 19-21 to debate and take a final vote on the proposed social studies standards. Because of the state’s large size, publishers will write new textbooks to meet Texas standards and then sell those books across the country.

“Our Founding Fathers understood that the best way to protect religious liberty in America is to keep government out of matters of faith,” said the Rev. Roger Paynter, pastor of Austin’s First Baptist Church. “But this state board appears hostile to teaching students about the importance of keeping religion and state separate, a principle long supported in my own Baptist tradition and in other faiths.”

Rev. Paynter spoke at a press conference with other clergy a week before the state board meets to consider final revisions to the proposed curriculum standards. Some state board members argue that the nation’s Founders wanted government to promote religion, particularly Christianity. In March the board rejected a proposed curriculum standard requiring high school government students to learn that the Founders barred government from promoting or disfavoring one religion over all others in America.

The rejection of that proposed standard was unwise because the nation’s founders saw how governments in Europe generated conflict by wedding church and state, said Robert Haas, assistant rabbi at Congregation Emanuel in Houston.

“In a country that is home to many faiths, it’s important for our students to understand that government must not pick and choose which religions to favor,” Rabbi Haas said. “That basic constitutional protection for the free exercise of religion has allowed faith to thrive in America for more than two centuries while other nations around the world have been plagued by religious conflict.”

Speakers at the press conference also included the Rev. Larry Bethune, pastor of University Baptist Church in Austin and the Rev. Valda Jean Combs, pastor of Wesley United Methodist Church in Waco. All are part of the Texas Faith Network, which includes more than 600 mainstream clergy from around the state.

Students in American government as well as history classrooms should learn about the First Amendment’s protections for religious freedom, Rev. Combs said.

“Religion has played an important and positive role in American history, but it has been able to do so because government does not decide which faiths to promote and which to disfavor,” Rev. Combs said. “Students should graduate from Texas public schools understanding that important principle.”