The New York Times Magazine cover story on Sunday focused on efforts by far-right members of the Texas State Board of Education to rewrite history in public school social studies textbooks. We found the magazine’s creative cover illustation to be especially ironic.

The painting of George Washington crossing the Delaware is perhaps one of the most famous depictions of an event from the American Revolution. But you would have a hard time finding an image of the painting — or one that hasn’t been digitally altered — in an American history book used in public schools today.

And why’s that? Publishers during the last adoption of social studies textbooks in Texas were worried about the location of Washington’s watch fob — which makes it appear (to some people, anyway) as though the man who became the nation’s first president crossed the Delaware River with his gonads hanging out. So editors, anxious about a heavily politicized State Board of Education always searching for a reason to reject their textbooks, pulled the image from their pages.

Click on the magazine’s cover image below for a larger version. 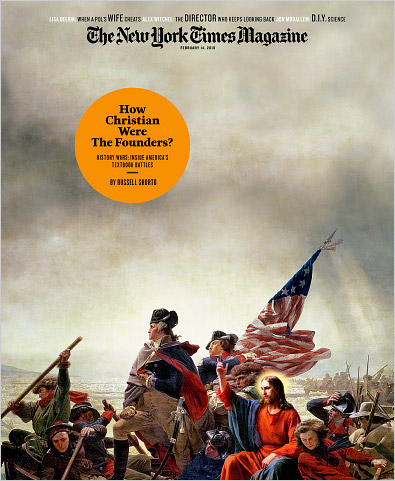 15 thoughts on “Censoring the Presidential Jewels (sort of)”