Bryan Fischer, a spokesperson for the right-wing group American Family Association (and a supporter of another presidential run by Texas Gov. Rick Perry in 2016) has Friday’s horrifying massacre in a Connecticut elementary school all figured out. Fischer posted his “solution to school violence” on Twitter this morning: 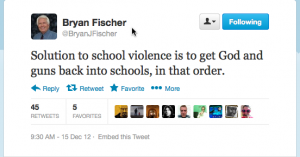 “Solution to school violence is to get God and guns back into schools, in that order.”

12 thoughts on “Bryan Fischer: ‘Get God and Guns Back into Schools’”