11:20 a.m. – The Texas State Board of Education meeting has just begun. The board will soon begin to hear public testimony on the proposed social studies curriculum standards for public schools. You can follow the action here and on the Texas Education Agency’s live Webstream. Meanwhile, here’s a photo of a press conference this morning by Students for a Smarter State Board of Education. This coalition of student groups, including the TFN Student Chapter, is calling on the state board to stop promoting political agendas over sound scholarship in the standards. 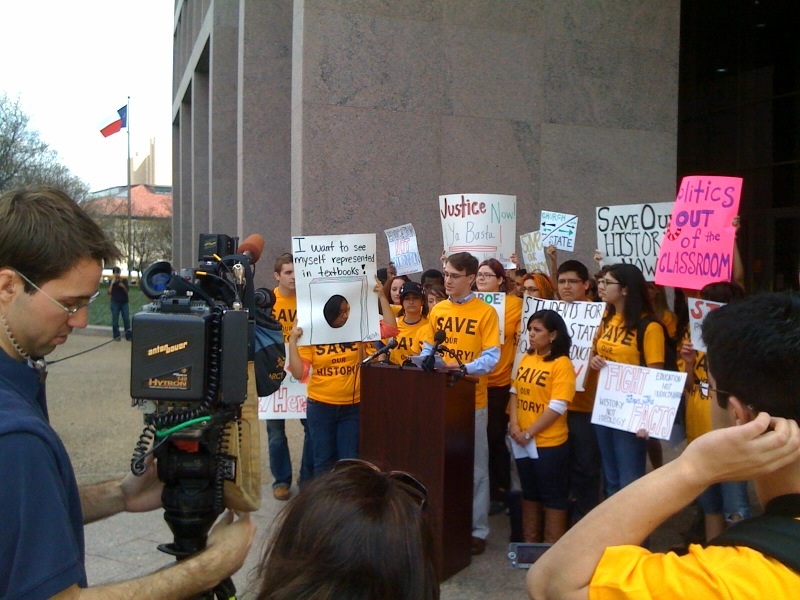 11:28 a.m. – Another photo (below) from the students’ press conference this morning. 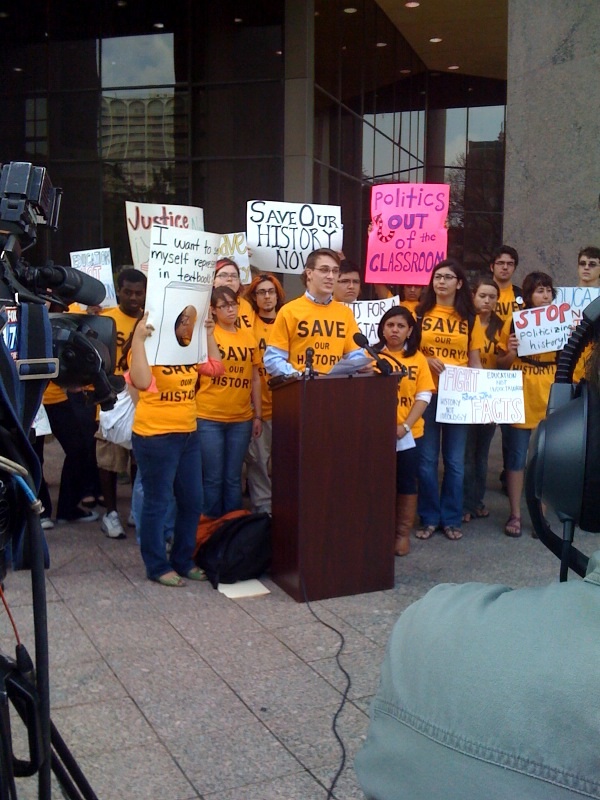 11:30 a.m. – The board is wrapping up discussion of preliminary agenda items. The board is scheduled to hear two hours of public testimony before beginning formal debate and amendments of the proposed standards.

11:33 – Changes made to the standards at the board’s meeting are available here.

1 1:36 – For Pete’s sake. Board member Terri Leo, R-Spring, and David Bradley, R-Beaumont Buna, that the board is being gracious in extending the time for public testimony to two hours (instead of 30 minutes). Yes, how gracious for elected officials to take the time to listen to the concerns of their constituents. Perhaps someone should remind board members that they are public servants, not royalty who usually can ignore the peasants out there.

11:39 a.m. – Board member Rick Agosto, D-San Antonio, reminds the board that they should keep limit questions and comments so that more people who traveled to Austin can testify. Board member Lawrence Allen, D-Houston, asks that the board be flexible on how long the testimony will last and remember that people have traveled to Austin from around the state to speak about the standards. We should note here that the board cut off testimony in January even though dozens of people — including veterans in uniform — were still waiting to testify.

11:54 – If Rep. Christian thinks including Rosh Hashanah in the standards is so important (and we think it should be included, by the way), perhaps he could take the time to learn how to pronounce it correctly. TFN will post video of his testimony when we have it.