Despite claiming to be a Bible-believing Christian, David Barton seems to have no qualms about breaking the biblical commandment against bearing false witness. Today, for example, Barton tweeted the following nonsense:

Barton’s tweet then links to an article on the anti-abortion website LifeNews.com that criticizes a January 31 report for the U.S. Department of Homeland Security, “Hot Spots of Terrorism and Other Crimes in the United States, 1970 to 2008.” The report explores where terrorist attacks tend to occur in the United States and the ideologies that appear to have motivated the terrorists. Among the ideological categories noted by the report are “extreme right-wing,” “extreme left-wing,” “religious,” “ethno-nationalist/separatist” and “single issue.” The latter category includes “groups or individuals that obsessively focus on very specific or narrowly-defined causes (e.g., anti-abortion, anti-Catholic, anti-nuclear, anti-Castro). This category includes groups from all sides of the political spectrum.”

The latter description about “single issue” terrorists appears to have been enough for LifeNews.com to declare that ” the Obama administration has called ‘terrorists’ the majority of Americans who support the pro-life view on abortion. A January 2012 Department of Homeland Security document is making the rounds on the Internet and it paints an unflattering picture of pro-life Americans.” And then Barton chimes in with the same lie. 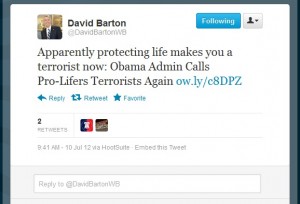 What Barton and the writers at LifeNews hope is that no one will bother to read the DHS report. Well, this is what the authors say in the report’s cover:

“To be clear, the National Consortium for the Study of Terrorism and Responses to Terrorism (START) does not classify individuals as terrorists or extremists based on ideological perspectives. START and the Global Terrorism Database, on which the Report is based, defines terrorism and terrorist attacks as ‘the threatened or actual use of illegal force and violence by a non-state actor to attain a political, economic, religious, or social goal through fear, coercion, or intimidation.’ The report is based on the key premise that the groups and individuals analyzed have actually carried out or attempted to carry out violent attacks in the United States for any political, social, religious, or economic goal. This is what qualifies them as terrorists, not their ideological orientation.”

In other words, the report doesn’t call all Americans who are anti-abortion “terrorists.” It calls people who engage in terrorism, for whatever reason, terrorists. And the fact is that some people who are obsessed by their opposition to abortion (or to Catholics or nuclear power) have engaged in acts of terrorism. Consider, for example, the anti-abortion extremist behind the bombing at the 1996 Atlanta Olympics.

The overwhelming majority of abortion opponents are clearly not terrorists. Nor are all anti-Catholic bigots or anti-nuclear activists. To suggest, as Barton and LifeNews.com do, that the Obama administration is saying otherwise is nothing more than a politically motivated smear.