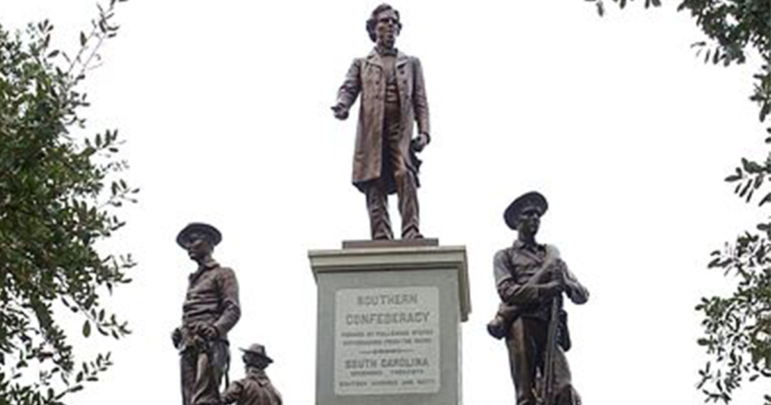 Last year the Texas Freedom Network joined scholars in calling on the State Board of Education to stop glorifying the Confederacy and Confederate heroes in public school history classrooms. We also advocated removing from the Texas Capitol a plaque that promoted the lie that the Confederacy didn’t fight to preserve the evil institution of slavery. In the following guest blog post, Bryan Register — an Austin Community College professor and founder of De-Confederate Austin — calls for abolishing Confederate Heroes Day as a state holiday. State Rep. Jarvis Johnson has filed a bill — HB1183 — that would do so. That bill has been referred to the House State Affairs Committee, chaired by state Rep. Dade Phelan.

One of Texas’ more obscure holidays is January 19, “Confederate Heroes Day”. It’s a day on which Texas honors “Jefferson Davis, Robert E. Lee, and other Confederate heroes”. “Confederate hero” is an oxymoron. You can be bold, tenacious, and decisive, and also not a hero.

The “Heritage, Not Hate” crowd who wants us to honor the racists and traitors in gray seem to confuse three things. First, there is ancestry. Second, there is boldness. Third, there is virtue.

The neo-Confederate web is replete with images of Confederate corpses or tombstones saying that these are why southerners need to honor our ancestors. But my slave-owning ancestors, and my ancestors in Confederate service, don’t become honorable just because their blood is in my veins. I don’t have the power to reach back across time and make them decent people. Being your ancestor doesn’t make someone honorable.

There’s no question but that Confederate soldiers struggled mightily and suffered greatly. They truly have my sympathy. So do German soldiers taken prisoner in Stalingrad who died in Soviet labor camps, and Soviet soldiers taken prisoner during Barbarossa who died in German labor camps. Also, those horrors don’t convert the Nazi or Soviet causes into anything noble, and they don’t make the soldiers on either side into heroes.

Being an ancestor of mine does not make a person honorable. Boldness and a willingness to sacrifice is honorable only if it is done on behalf of a cause that is itself honorable. The Confederate cause was slavery; that cause was dishonorable and so was each and every ancestor of ours who fought for it.

Legislators: Abolish this obscene betrayal of history and our fellow Americans.