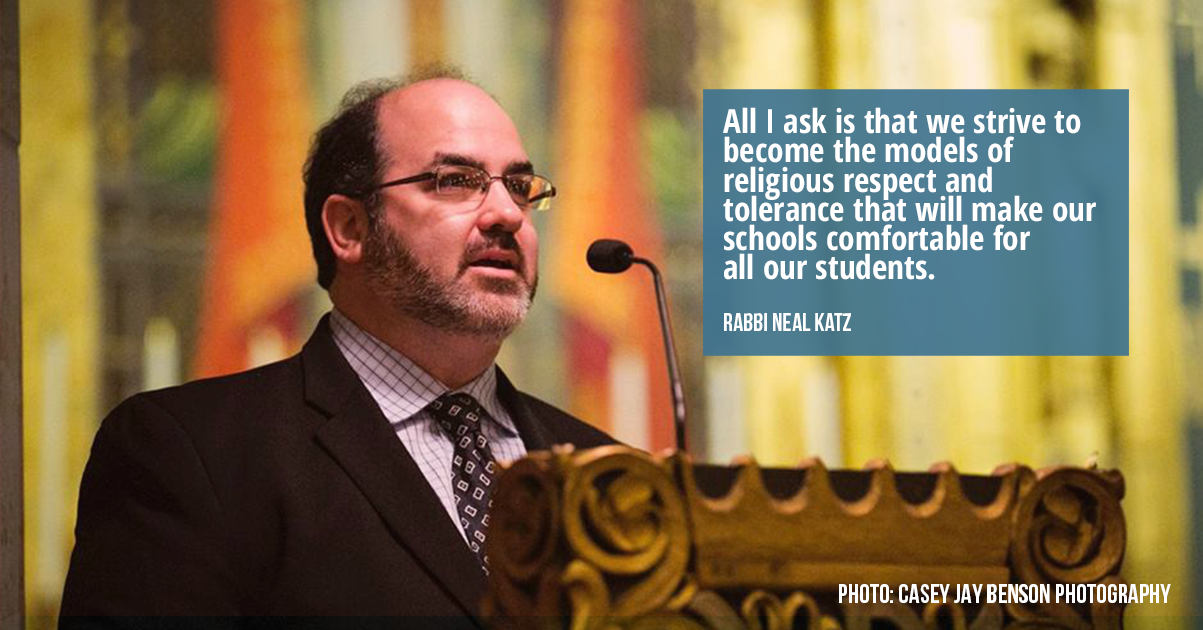 I am a rabbi in Tyler, Texas, and my three children proudly attend our local public schools. At the invitation of our local superintendent, I was recently honored to share a presentation on religious diversity with all of the principals in our school district. This invitation did not come out of nowhere. It was part of an ongoing dialogue between myself and local educational leaders about religious diversity.

I have been part of the religious landscape of Tyler for over 15 years. And as a passionate advocate of interfaith dialogue and local collaborations, I have become a sounding board for many private complaints about the struggles that non-Christian children face when attending public schools. The complaints are not just from the Jewish community. Indeed, parents from the Muslim, Hindu, atheist, Baha’i, Unitarian, and other communities share similar stories with me.

About a year ago, I began a series of meetings with select leaders in our local educational community to address the topic of respecting religious diversity. I began each of those meetings with a simple question. I asked, “Are you okay that when a non-Christian student comes to a public school campus – that the student sometimes feels that their religion is belittled, not respected, and made to feel second rate?”

Of course, all of our leaders said no – that would never be acceptable. That is the correct answer. But it does happen – and it happens often enough that there is a constant undercurrent of grumbling about religious overreach in our public schools. There are numerous examples of when students are made to feel uncomfortable because their teachers or principals crossed a fine line between being good Christians themselves – and promoting that religious worldview in their capacity as public school employees.

And some kids can shrug it off – and move on. But other kids take it personally. One parent told me that they felt public school was not a safe space to be if you were a non-Christian student. I calmed them down and met with the teacher who had been inadvertently upsetting the student – and with simple adult dialogue the issue was resolved. The teacher was unaware that they were upsetting the student.

This is exactly why remaining silent is the same as condoning the practice. Unless a parent or local religious leader intervenes, many employees can simply be unaware as to what constitutes appropriate religious conversation in schools.

I asked the assembly of principals, “How do we cultivate a learning environment at our public schools where the personal religious views of the faculty and the staff are not getting in the way of education?” Our public school campuses should be a safe and welcoming place for all our students, regardless of their religious background. This is a fundamental and common sense approach toward religious diversity. But in practice, we sometimes fall short. I asked the principals to pass the message along to their staffs that they should consider the tapestry of religious communities that walk on to their campuses every day. And let their teachers know that respecting religious diversity is an important behavior to model to our students.

And this is not just a dig at the Christian community. If a Christian student felt their religion was being targeted and made to feel second rate at our schools – I would be the first in line to defend them. This is about respecting all of our students – and not setting one religion above any other. I know I live in the buckle of the Bible belt – I know I live in the red part of the red state – and I am aware that I live in a community heavily influenced by evangelicals. But I don’t care. The public school campus is not the place where anyone’s personal religious or political views should interfere with good education.

I love my school district, and the work and talent that they bring to the table. I am biased because I see awesome results in my own children. I am also reassured by leadership that allowed for this dialogue to occur. All I ask is that we strive to become the models of religious respect and tolerance that will make our schools comfortable for all our students. It is a simple request.

Rabbi Neal Katz, of Congregation Beth El in Tyler, Texas, is a member of TFN’s board of directors.