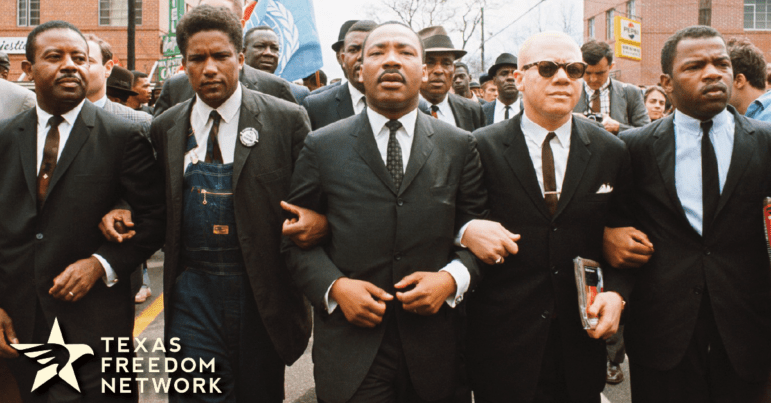 “My dear friends: Your vote is precious, almost sacred. It is the most powerful nonviolent tool we have to create a more perfect union.”

This Black History Month, the Texas Freedom Network and its program for young Texans, Texas Rising, are focusing on the decades-long fight that folks in the Black community have led to ensure the right to vote for everyone.

While there have been major wins in the past 60 years, we are living in an intensely tumultuous time for democracy when state legislatures across the country, including ours in Texas, move to make voting harder than it should be. During these renewed attacks, we are called to reflect on the history of voting rights.

We’ve put together a timeline of how every citizen gained the right to vote, as well as the wins and losses we’ve experienced along the way.

This year, you can be part of the historic and ongoing fight against restrictive voting laws, as Texans (at least those who’ve not been silenced by SB 1, a Texas bill making it increasingly difficult to vote) have the chance to make their voices heard at the polls in the upcoming primary and general elections.

Pledge to head to the ballot box on March 1, 2022, and join our movement here.

Voting Rights in America: A Timeline

Ensuring the voting rights of every citizen is central to our mission at TFN.
Join our movement today.

“Selma is a place where we injected something very meaningful into our democracy. We opened up the political process and made it possible for hundreds and thousands and millions of people to come in and be participants.”

Since 1965, the victories achieved by civil rights leaders have continuously faced challenges–from shifting the cultural norms around voting to navigating obstacles designed to make voting difficult for minorities.

Below are just some of the barriers created to suppress the votes of marginalized communities and the actions taken in response by voting rights advocates today:

“Voting is the foundation stone for political action.”

Six decades after the march from Selma to Montgomery, the fight to strengthen voting rights continues.

Honor the legacy of civil rights leaders: Make a plan and pledge to vote in 2022.