It looks like anything is fair game for anti-public school fanatics. Peggy Venable, who directs the Texas office of (David and Charles Koch-funded) Americans for Prosperity, put up this odious Twitter post last week after police shot and killed an eighth-grade student in Brownsville: 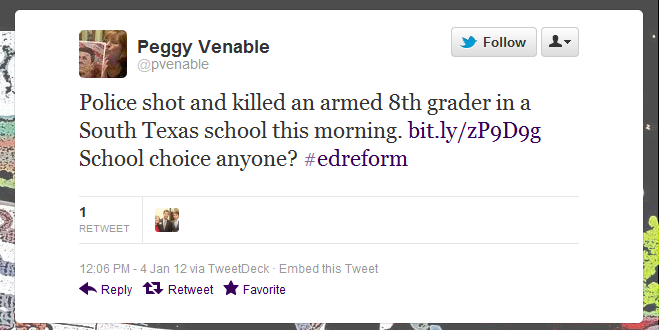 “School choice,” of course, is code for private school vouchers. During the 2011 Texas legislative session, Venable’s group supported a radical voucher scheme that could have diverted billions of dollars from the state’s public schools to private and religious schools. The bill would actually have had the state of Texas (not counting local or federal funds) pay more for a student to attend a private school than a public school. Venable was also thrilled that the Legislature slashed more than $5 billion in funding for public schools from the current two-year budget.

Now she is using the horrifying and tragic death of a junior high school student to push her anti-public education agenda. How cold and shameful.