Advocates for women’s reproductive health care are still celebrating Monday’s U.S. Supreme Court decision striking down some of the most extreme anti-abortion regulations passed by the Texas Legislature in 2013 (House Bill 2). But we’ve been monitoring the almost unhinged and even violence-themed fury from the right over the court’s clear acknowledgment that those regulations were really intended to close abortion clinics, not protect women’s health.

Among the health and safety standards that abortion facilities must meet include rules for the inspection of medical instruments, cleaning and decontaminating those instruments, ensuring that instruments are sterile (several dozen specific rules), maintaining disinfection protocols, maintaining performance records, storing hazardous chemicals, equipping and maintaining sanitary procedure rooms and equipment, and preparing emergency evacuation procedures. And abortion facilities are subject to unannounced state inspections. Those standards remain on the books.

But health experts said the regulations struck down on Monday were medically unnecessary. In fact, the justices pointed out how those regulations went far beyond what is required for other far more risky medical procedures. Here’s how Justice Ruth Bader Ginsburg put it:

“It is beyond rational belief that H. B. 2 could genuinely protect the health of women.”

She’s right. HB 2 wasn’t about protecting women’s health. It was about using onerous, expensive and unnecessary regulations to close clinics and block a woman’s constitutional right to get an abortion if she so chooses. And some of the comments from politicians and activists angry about Monday’s ruling make that truth pretty clear.

The rhetoric from state Rep. Jonathan Stickland, R-Fort Worth, has been especially hyperbolic: 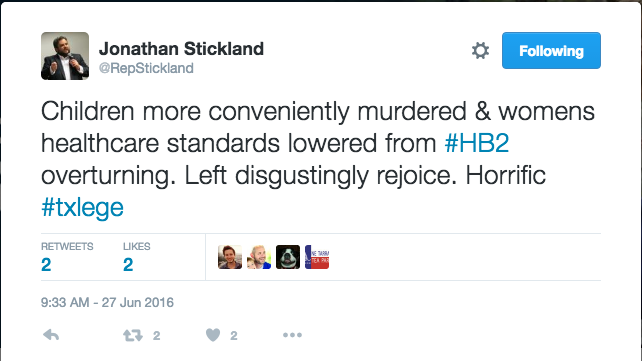 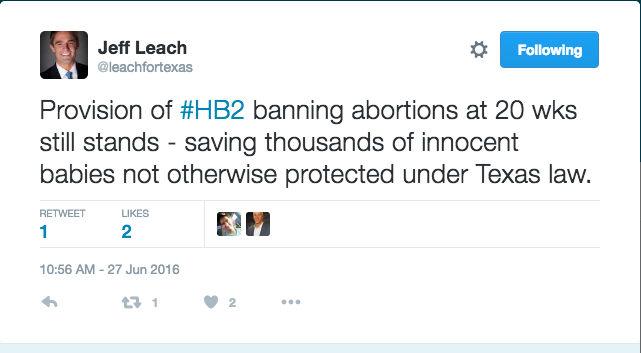 One of the most extreme anti-abortion groups, The Justice Foundation in San Antonio, sent out a press release calling the Supreme Court’s decision a “crime against humanity” and warned that the decision “invites the judgment of God upon a nation which sheds innocent blood on a vast scale.” Here’s that organization’s Allan Parker from the press release:

“Without massive repentance America is doomed as a nation.  We are going to experience much more destruction and more terror and the probable elimination of America as a nation.”

That kind of militant and even violent rhetoric from the right is frightening. Unfortunately, it’s likely to get only worse.

And here are eight minutes of Lt. Gov. Dan Patrick on Monday, taking a break from demagoguing on bathrooms to pretend the regulations he helped pass are about women’s health: