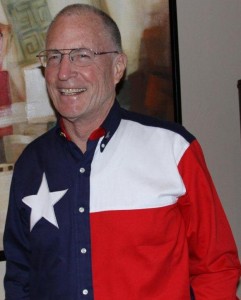 TFN neither supports nor opposes Common Core, standards that states across the country came together to develop and implement in their public schools. But we’re fascinated by the almost unhinged rants from right-wing activists and politicians who hate those standards for English/language arts and mathematics. Take, for example, what East Texas state Sen. Bob Hall, R-Edgewood, says about Common Core.

Hall wrote an anti-Common Core screed in January that the Texas Eagle Forum has republished in its own March newsletter. Although Common Core is a state-led program, Hall promotes familiar claims that President Obama is using the standards to implement a federal takeover of public schools and turn Americans into “robots and servants of the state.” Here’s a glance into Hall’s paranoid world:

“Instead of the focus of education being on reading, arithmetic, history, and acquiring actual knowledge, the goals of a Common Core education focuses on values clarification and indoctrination into a liberal mindset that includes the sexualization of students through sex education and the normalization of inappropriate sexual literature. Some of the goals of the group behind the Common Core liberal agenda include: the creation of racism offenses, teaching homosexuality is normal behavior to children, acceptance of a liberal immigration policy designed to destroy identity, and the encouragement of the breakdown of the family. In the further quest to humanize the curriculum used in our schools, Common Core standards label the Bible as ‘off limits’ in the classroom and schools are forced focus on a toxic worldview devoid of a supreme loving God.”

How do you have reasonable discussions about public education with people who say such things? But the Texas Legislature and State Board of Education are filled with politicians who accept this hokum as absolute truth.