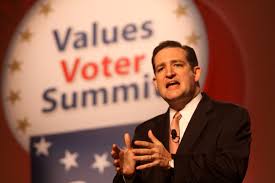 As Donald Trump swept most of the Republican presidential primaries on Tuesday, Texas Sen. Ted Cruz tried to portray himself as the only real alternative for GOP voters. But Cruz didn’t spend much (if any) time criticizing the Trump campaign for its hateful divisiveness. There’s a reason for that: Cruz’s campaign is infected with the same kind of hate, as our friends at Right Wing Watch reminded everyone on Monday. From the Right Wing Watch post:

Kevin Swanson, the pastor courted by Ted Cruz who has repeatedly called for the execution of gay people, including just minutes before speaking with Cruz at an event last November in Iowa, dedicated a radio program last week to attacking the Girl Scouts for supporting women’s and LGBT rights, saying that the group’s leaders are worthy of death.

Swanson, who has spent years calling for a boycott of Girl Scouts cookies and accusing the organization of promoting communism and turning girls into lesbians, said that Girl Scouts leaders have violated Jesus’ teaching that it would be better for someone to have a millstone hung around their neck and thrown into the sea rather than cause a child to sin.

This instruction, Swanson said, should be applied literally. After criticizing the Girl Scouts because it “promotes lesbianism” and movies like “Harry Potter” and “How To Train Your Dragon” for featuring “homosexual mentors provided to little boys” — a criticism he detailed at the rally with Cruz — Swanson said that people must put into effect Jesus’ teaching against debasing children with such “movies that promote homosexuality or organizations that promote homosexuality.”

“You’ve got to take what He says and you have to apply it,” Swanson said.

So when will Cruz repudiate Swanson and his hate-mongering? We’re waiting — but not holding our breath. Cruz’s anti-LGBT record is pretty clear. He has called the freedom to marry for gay and lesbian couples “an onslaught … to tear down traditional marriage” and even criticized a political opponent for, as mayor of his city, simply participating in an LGBT pride parade.

His father, Rafael Cruz, has employed even more divisive and hateful rhetoric. The elder Cruz has suggested that voters who elected Annise Parker as Houston’s mayor are “wicked” because Parker is lesbian. He has also falsely claimed that San Antonio’s Nondiscrimination Ordinance levies fines against clergy who preach against homosexuality.

Of course, none of that approaches the extreme and hateful rhetoric Swanson appears to use on a regular basis. But Cruz’s association with that kind of hate-monger is appalling. So let’s not presume that Donald Trump’s campaign has a monopoly on hate. Cruz represents plenty of religious-righters who despise LGBT people and their families. You simply have to listen to their own words.