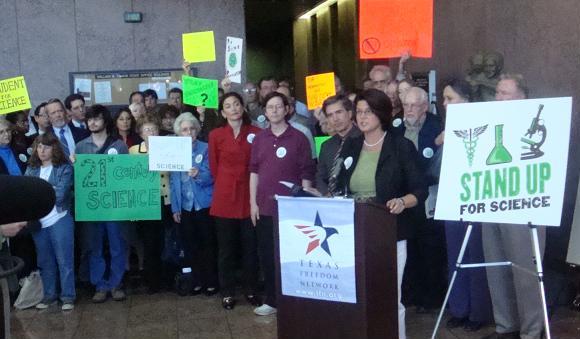 Even before today’s Texas State Board of Education hearing on new public school science curriculum standards begins, sound science has taken a big hit. In September teacher writing teams released draft standards that wisely removed loaded language requiring schools to teach about so-called “weaknesses” of scientific theories like evolution. Creationists on the State Board of Education have seized on the “weaknesses” requirement in the past to demand that publishers challenge evolution in textbooks sold to schools in Texas and across the country. Scientists have repeatedly rejected that requirement as nonsense by pointing out that evolution is sound, established science.

So until Monday, efforts to promote a 21st-century science education in Texas schools appeared to have the upper hand. But then the Texas Education Agency — the state’s administrative agency in charge of public schools — released second drafts of the science standards that take a big step backward.

Second drafts for three of eight high school courses, including biology, now include a requirement that students learn the “strengths and limitations” of scientific theories. That language is right out of the playbook of the Discovery Institute, a major anti-evolution pressure group based in Seattle. Just as bad, science standards for middle school now call on students to develop “alternative explanations” for scientific concepts. That would kick the door wide open for evolution deniers to promote “intelligent design”/creationism in middle school classrooms.

At a press conference this morning, TFN President Kathy Miller (speaking in the photo above) joined with academic, business and faith leaders to condemn these irresponsible changes:

All of a sudden, a new draft appears with loaded buzz words that evolution deniers have used repeatedly to launch phony attacks on evolution. This raises serious questions about what and who is driving the process here. We hope writing teams will have an opportunity to fully discuss and reverse these troubling changes.

Mainstream scientists have made it crystal clear that irresponsible attempts to promote phony arguments against evolution are based on ideology, no science. It’s like saying there are “weaknesses” to the study of gravity or that Earth really doesn’t revolve around the sun after all. Tragically, the price for dumbing down the science curriculum will be paid by Texas kids who won’t be prepared to compete and succeed in the 21st century.

How the changes came about is unclear at this time. The “strengths and limitations” language mirrors, however, recommendations from evolution deniers appointed to a curriculum review panel last month by creationist state board members. One of those reviewers is vice president of the Discovery Institute.

Although the new draft standards have been presented as a product of the teacher writing teams, TFN has learned from various sources that team members actually reached no consensus on the new language. The writing teams will have an opportunity in December to strip out the “strengths and limitations.” Dozens of science supporters are preparing to testify before the State Board of Education this afternoon and evening to call for doing just that. In the meantime, however, expect to hear creationists on the state board crow that they are winning their war on evolution — a war in which Texas students and their ability to compete and succeed in the 21st century will be the casualties.

One thought on “Taking a Step Backward on Science Standards”