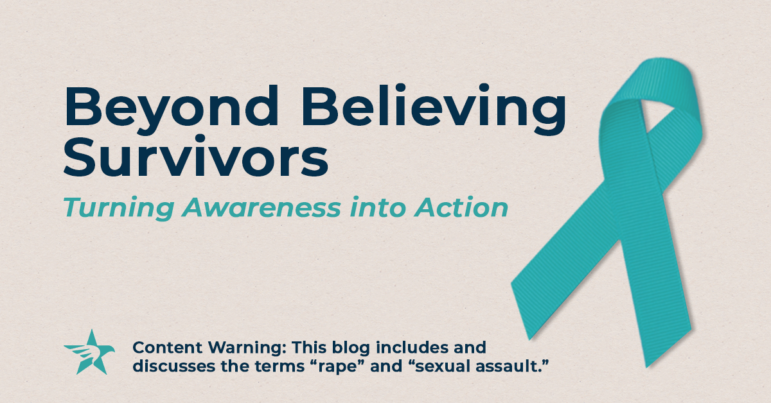 April is Sexual Assault Awareness & Prevention Month, giving us the intentional space to join together as a community to go beyond believing survivors and turn awareness into action.

We all have a part to play in supporting survivors, uplifting their voices, believing them, and destigmatizing the way we talk about sexual assault in our everyday lives. But one of the most powerful ways we can shift the cultural response to sexual assault and the treatment of survivors is to support and champion legislation and community initiatives that provide tangible resources and unburden the path to justice and healing for all survivors.

33% of all Texans experience sexual assault in their lifetime – an incredibly high statistic considering 90% of cases go unreported.

In 2020, Texas ranked the 15th most dangerous state for rape and sexual assault.

Our high prevalence rate for this type of violence is made even more devastating by the state’s current abortion ban, which offers no exceptions for victims of rape or incest. Governor Abbott has said this is not detrimental to victims, though, as the state would use aggressive tactics “to eliminate all rapists from the streets of Texas.”

Since the overwhelming majority of these attackers will never be identified, this is an incredibly implausible claim. Bans like SB8 are yet another form of abuse survivors will now endure in Texas, further compounding the trauma they’ve already experienced.

The people who’ve dedicated their lives to supporting survivors are suffering under this ban as well.

Under SB8, a perpetrator could sue anyone who “aids and abets” a survivor in obtaining an abortion after six weeks. This would include staff at shelters or crisis centers who might help someone find resources for healthcare.

Advocates are also painfully aware of how unlikely it is that survivors of domestic and sexual abuse would be able to obtain an abortion before 6 weeks, even if they knew they were pregnant in time.

“Too often, survivors are trapped in their homes with the perpetrator, unable to meet the 6-week restriction. After 45 years of listening to survivors of sexual assault and violence, rape, and incest, SAFE is clear that the most important aspect for healing is returning to survivors the power and control over their own lives. Importantly, survivors of rape and incest must have control over the scene of the crime—their bodies,” said SAFE’s Co-CEOs Kelly White and Julia Spann in a September statement.

Find Resources for Survivors Across Texas

Across the nation, many survivors of sexual assault are still waiting for justice as testing of rape kits continues to be severely delayed.

In 2011, a bill by former Senator Wendy Davis was passed that required law enforcement agencies to audit the number of untested rape kits so that funds could be allocated to reducing the backlog in the 2013 Legislative session.

In 2013, the SAFER Act was passed, and over the course of the last 10 years, several other laws have been introduced and enacted to work toward eliminating the kit backlog. Just last year, Texas received a $2.8 million grant from the Department of Justice to continue this work.

As advocates point out, however, reducing the backlog only addresses the symptoms of sexual assault, and is just one piece of honoring survivors.

In the 2019 and 2021 Texas legislative sessions, decades of organizing from advocate groups like TAASA, The Texas Council on Family Violence, SAFE, and countless others resulted in another landslide of bills — both passed and introduced — that work to create safer communities better equipped to prevent sexual assault and offer resources to survivors.

For survivors and advocates, these bills will hopefully mean a path to healing, and even justice–but they also signal an important shift in our community’s priorities and our collective power.

Lawmakers alone did not do this. The millions spent on these resources and initiatives are the result of advocacy groups and everyday citizens organizing for powerful change. Sexual assault prevention and awareness is an ever-evolving mission. Survivors cannot prevent their own sexual assault, but we as a community can dismantle our culture’s historical practice of blaming survivors, question the systems that often fail survivors, and demand that we continue working toward safer, more equitable communities where fewer factors that lead to violence exist.

This Sexual Assault Awareness Month, may we all pledge to believe, uplift, and take action for survivors 365 days a year.