The people behind religious-right activist David Lane’s Restoration/Renewal Projects are getting plain lazy to the point where they’re just hitting “copy-paste” on old material and distributing it in support of yet another Rick Perry political campaign.

The Iowa Independent reports members of the Iowa faith community recently received invitations from the Iowa Renewal Project to attend a “pastors’ policy briefing” to be held next month in Des Moines. The date will be less than two months before the state’s first-in-the-nation presidential caucuses at which Gov. Perry will rely heavily on votes from conservative evangelicals if he is to have a viable shot at the Republican presidential nomination.

TFN has for years been documenting the activities of the Texas Restoration Project, which was also organized by Lane appears to be almost a carbon copy of what the Iowa Renewal Project is now attempting. Restoration, Renewal, potato, po-tah-to.

As stated in the Texas Freedom Network Education Fund 2006 report on the religious right in Texas, the mission of the Texas Restoration Project has been to mobilize conservative pastors and their congregations and encourage them to use faith as a tool to promote a political agenda.

Gov. Perry has been the featured speaker/guest for at least eight of the Texas Restoration Project’s briefings going back to 2005. At the Texas events, hundreds of pastors and their spouses have been treated to all-expenses-paid lodging and meals. The cost of the six 2005 events was picked up by the Niemoller Foundation, a now-defunct private foundation funded by major Perry campaign donors, including San Antonio businessman James Leininger (the religious right’s sugar daddy in Texas). Niemoller paid Lane $167,500 to organize the six events. The foundation also funneled about $100,000 each to two religious-right groups that year for “administrative services” tied to the events: Texas Focus on the Family affiliate Liberty Institute (then called Free Market Foundation) and San Antonio-based Justice at the Gates. A prominent Republican consulting firm got nearly $500,000.

Lane has used the Texas Restoration Project model to create similar “Renewal Projects” in major presidential battleground states around the country. Former Arkansas governor and GOP presidential candidate Mike Huckabee was a featured speaker at Renewal Project events in 2008. And Gov. Perry (along with Newt Gingrich) will speak at the Iowa event next month. The invitations and run-of-show, including many of the speakers, are almost identical to those for Texas Restoration Project events.

For starters, check out the Iowa briefing invite, courtesy of the Independent (click images to enlarge): 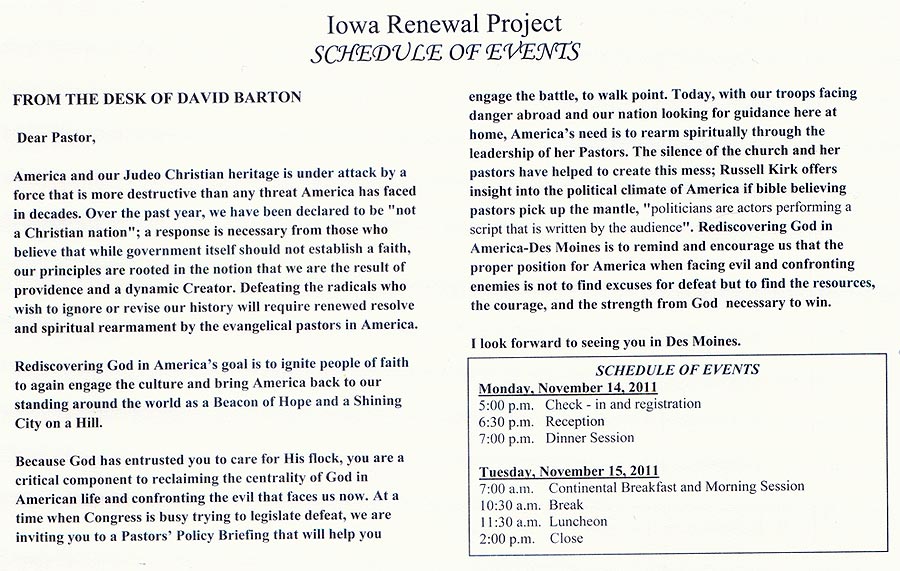 Now compare the Iowa invite to the invite for a 2008 briefing in Texas: 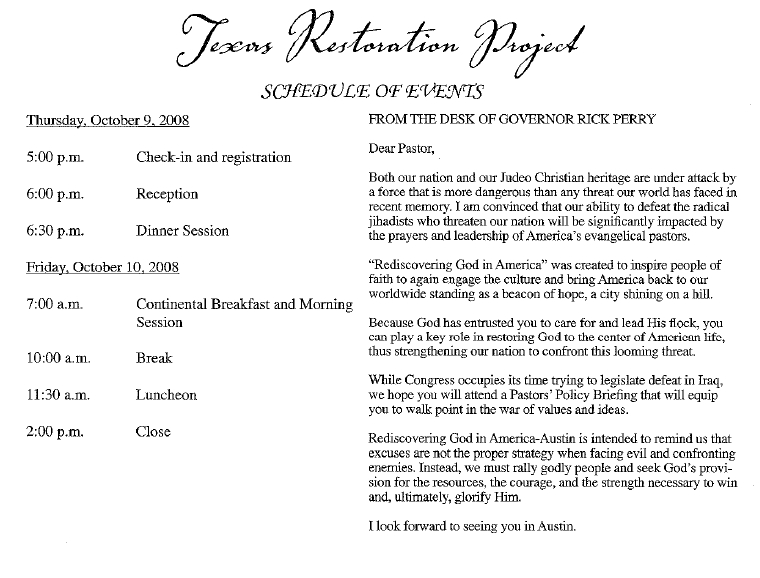 The invites are almost word-for-word mirrors of each other on everything from the schedule to the supposed threats to the country and “our Judeo-Christian heritage” and even to the font types used. One might call it plagiarism except that you can’t really plagiarize from yourself.

The similarities don’t end there. Historical revisionist David Barton has been at several of these briefings, and as you’ll note that the Iowa invite comes from the WallBuilders founder and former vice chair of the Texas Republican party himself. And Kelly Shackelford, the head Liberty Institute and a speaker at Texas Restoration Project events, is also speaking at the Iowa “briefing.”

Also on the Iowa schedule is Gov. Perry pal Don Wildmon, the head of the American Family Association. AFA, identified as a hate group by the Southern Poverty Law Center, paid $600,000 to sponsor Gov. Perry’s prayer event in Houston in August, just before the governor formally announced his presidential run.

We’ll say this again: these Restoration/Renewal Project events are little more than thinly veiled attempts to turn houses of worship into campaign tools and use faith as a weapon to divide voters. So who is paying for the Iowa event, Gov. Perry? Leininger? Other campaign donors? We think voters have a right to know.