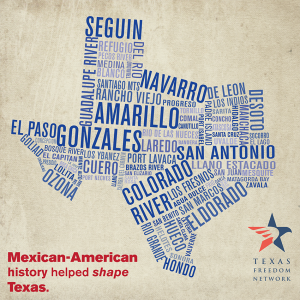 When Texas last adopted social studies textbooks in 2002, the new texts — particularly for the Grade 7 Texas History course — came under heavy fire from critics concerned over what they saw as poor coverage of the history and experiences of Mexican Americans. So when publishers submitted their proposed new textbooks this past spring, we wanted to know how their products covered Mexican-American history in the Lone Star State.

The answer: coverage is considerably better than it was 12 years ago, but some concerns remain.

The Texas Freedom Network Education Fund asked Dr. Jose Maria Herrera, a historian at the University of Texas at El Paso, to review textbooks for the Grade 7 Texas History. Textbooks from major publishers Houghton Mifflin Harcourt, McGraw-Hill and Pearson Education are the only ones currently under consideration by the State Board of Education. Herrera summarized his findings in reports to each of the three publishers today:

“I evaluated the sections of your product that are pertinent to my field of expertise – 19th century American history and U.S./Mexican relations during the early National period (i.e. topics 3-4 and parts of 5). I also reviewed the sections related to Mexican-American history during the 20th century. … Overall, I found coverage of these areas in your product to be outstanding in some respects, but there are some very important details that caused concern on my part.”

You can read Herrera’s letters to the publishers and summaries of his findings here:

Dr. Herrera submitted his reviews to each publisher, as well as to the State Board of Education, earlier today.

Because the purpose of the review was to identify ways publishers can improve their textbooks before final adoption by the State Board of Education later this month, Herrera’s reports mostly highlight concerns over factual errors, areas of weak coverage and examples of bias. He makes clear, however, that each of the textbooks has laudable strengths in addition to the concerns he notes.

The TFN Education Fund has already released reports from other scholars who reviewed other textbooks up for adoption this year. Click here to read those reviews.