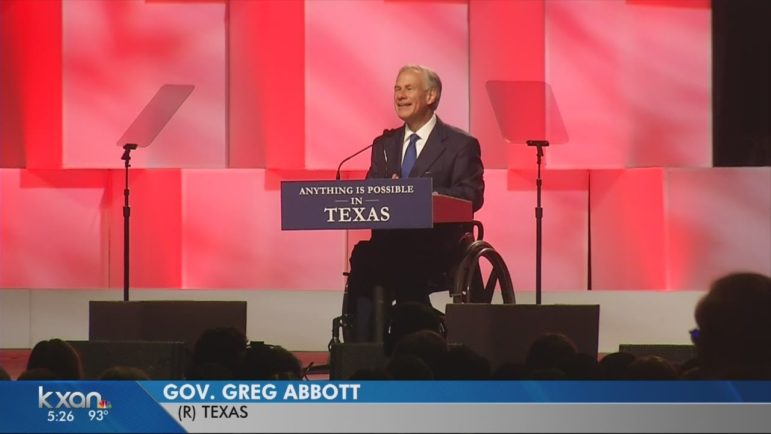 In case you didn’t know, the religious right still has the Texas Republican Party firmly in its grip. Just check out the platform adopted at the party convention this month. You’ll see all the confirmation you need.

We admit to being surprised at a few planks in the new platform — like calling for the decriminalization of small amounts of marijuana. But we still see the typical right-wing nuttery on issues like climate change (phony!), minimum wage (hate it!), state sovereignty (nullification, hell yeah!), the Voting Rights Act (repeal it!), immigration (kick ’em all out!), the Confederacy (long may it wave!), and guns (OMG! guns!).

But there are lots of places where you really see how much the religious right still controls the party. The Texas GOP has simply not evolved at all, no pun intended. Some examples from the platform:

Abortion: Ban it, and: “We support repeal of the physician homicide exemption of the Texas Penal Code Section 19.06 unless it is absolutely required to save the life of the mother.”

Sex education: Ban it: “We demand the state legislature pass a law prohibiting the teaching of sex education, sexual health, or sexual choice, or identity in any public school in any grade whatsoever, or disseminating or permitting the dissemination by any party of any material regarding the same.”

Religion in public schools: Promote it: “We urge the legislature to end censorship of discussion of religion in our founding documents and encourage discussing those documents, including the Bible as their basis.”

Evolution: Undermine it: “Teachers and students should be able to discuss the strengths and weaknesses of these theories openly and without fear of retribution or discrimination of any kind.”

LGBT equality: Hate it. The Texas GOP is about as obsessed with LGBT issues as it is with guns and abortion. There are, unsurprisingly, multiple references. Such as:

We believe there should be no granting of special legal entitlements or creation of special status for homosexual behavior, regardless of state of origin, and we oppose any criminal or civil penalties against those who oppose homosexuality out of faith, conviction, or belief in traditional values.

We affirm God’s biblical design for marriage and sexual behavior between one biological man and one biological woman, which has proven to be the foundation for all great nations in Western Civilization. We oppose homosexual marriage, regardless of state of origin. We urge the Texas Legislature to pass religious liberty protections for individuals, businesses, and government officials who believe marriage is between one man and one woman.

We support the definition of marriage as a God-ordained, legal and moral commitment only between one natural man and one natural woman.

We believe this [Supreme Court] decision, overturning the Texas law prohibiting same-sex marriage in Texas, has no basis in the Constitution and should be reversed, returning jurisdiction over the definition of marriage to the states. The Governor and other elected officials of the State of Texas should assert our Tenth Amendment right and reject the Supreme Court ruling.

And, of course, bathrooms:

We call on the Texas Legislature to pass legislation to protect privacy in public schools and government buildings as allowed by Title IX of the Civil Rights Act, by ensuring multi-use facilities, including showers, changing rooms, and bathrooms, are designated for and used only by persons based on the person’s biological sex.

There is so much more. Check it out for yourself (with, we strongly urge, your adult beverage of choice). Perhaps you’ll wonder as we do: Is there room for moderate voices in the Texas GOP anymore? Sure doesn’t look like it.