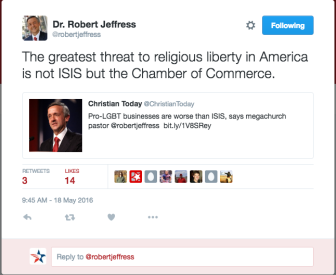 Religious-right leader Robert Jeffress, pastor of a Dallas megachurch, told listeners of a Family Research Council radio program Monday that protecting transgender people from discrimination means America is “headed toward chaos” and represents “rebellion against the plan of God.”

Our friends at Right Wing Watch report how Jeffress insisted that anti-discrimination efforts are a threat to religious freedom, and he specifically blamed the Chamber of Commerce and business interests. In fact, he told guest host Todd Starnes, Islamic State terrorists are less of a threat:

“It comes down to money, Todd, that’s what it’s about. And when states are being faced with the loss of business, they tend to fold real quickly. And I’ve said often that the greatest threat to freedom of religion in America is not ISIS, it’s the Chamber of Commerce. I mean, it’s the businesses that say to our representatives, ‘Oh, don’t pass laws like that, don’t pass these religious freedom laws because people will interpret that as anti-gay and we’ll lose business.'”

You might think Jeffress just got caught up in the moment and didn’t really mean to suggest that LGBT people are a bigger danger than religious extremists who have raped and murdered people throughout the Middle East and Europe. But no, Jeffress proudly tweeted (above) a report about his absurd comments on Wednesday.

Of course, he had plenty of other outrageous nonsense to say, including this about state officials who oppose President Obama’s anti-discrimination efforts:

“I think they’re going to stand firm on this and I hope that every governor of every state will have the guts to do that. I think it’s time for an all-out rebellion against this absolute tyranny of the Obama administration.”

The hate is strong with this one.