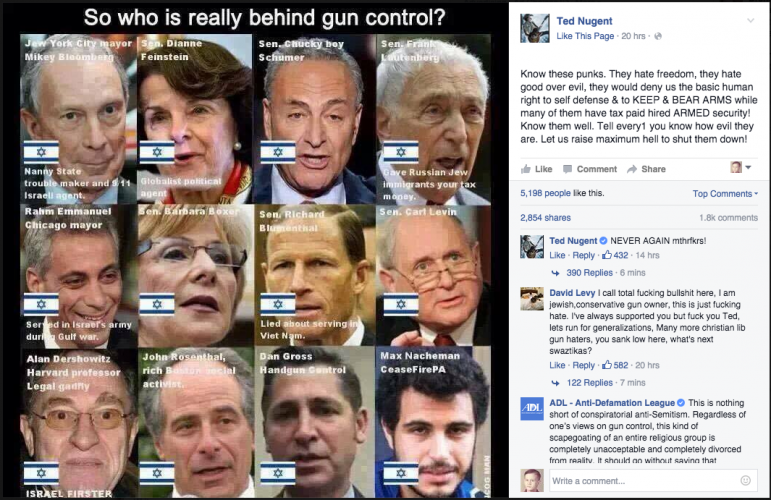 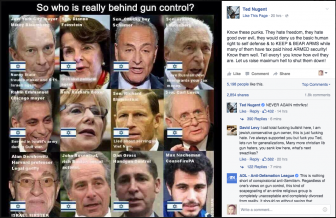 Ted Nugent, the aging right-wing rocker who prominently campaigned with Greg Abbott and calls the Texas governor a “blood brother,” is getting a heap of criticism for a vicious Facebook post on Monday. Nugent’s post, which includes an image apparently used on anti-Semitic websites, calls prominent Jewish Americans “punks” and claims that they “hate freedom” because they support gun safety laws.

“Know these punks. They hate freedom, they hate good over evil, they would deny us the basic human right to self defense & to KEEP & BEAR ARMS while many of them have tax paid hired ARMED security! Know them well. Tell every1 you know how evil they are. Let us raise maximum hell to shut them down!”

The New York Daily News criticized Nugent’s “wacko” post, calling it “an anti-Semitic message … charging that Jews are trying to take away his precious guns.” The Anti-Defamation League has called on Nugent to remove the image, which it says has appeared on anti-Semitic websites in the past. Other critics made their own objections clear in comments on Nugent’s Facebook post.

But a defiant Nugent doubled-down in another profanity-laced Facebook rant later the same evening:

Just when you hope that mankind couldnt possibly get any dumber or more dishonest, superFreaks rise to the occasion. What sort of racist prejudiced POS could possibly not know that Jews for guncontrol are nazis in disguise? “NEVER AGAIN!” Anyone? Anyone?? RUFKM! The founder of Jews For the Preservation of Firearms Ownership called me his 2nd Amendment/Freedom hero. The NEVER AGAIN battlecry was universally embraced by all good people who will make sure another Holocaust never happens again. Freaks have plummeted to whole new low. Plummet on punks. Plummet on. Meanwhile I adjust my yamika at my barmitzva playing my kosher guitar. My dad killed nazis & saved Jews in WWII. Eat me.

Nugent, of course, has the right to spew whatever hateful and outrageous nonsense he wants. But when will Gov. Abbott and other politicians who have prominently campaigned with him finally end their silence and repudiate Nugent and his vile and almost unhinged rhetoric?