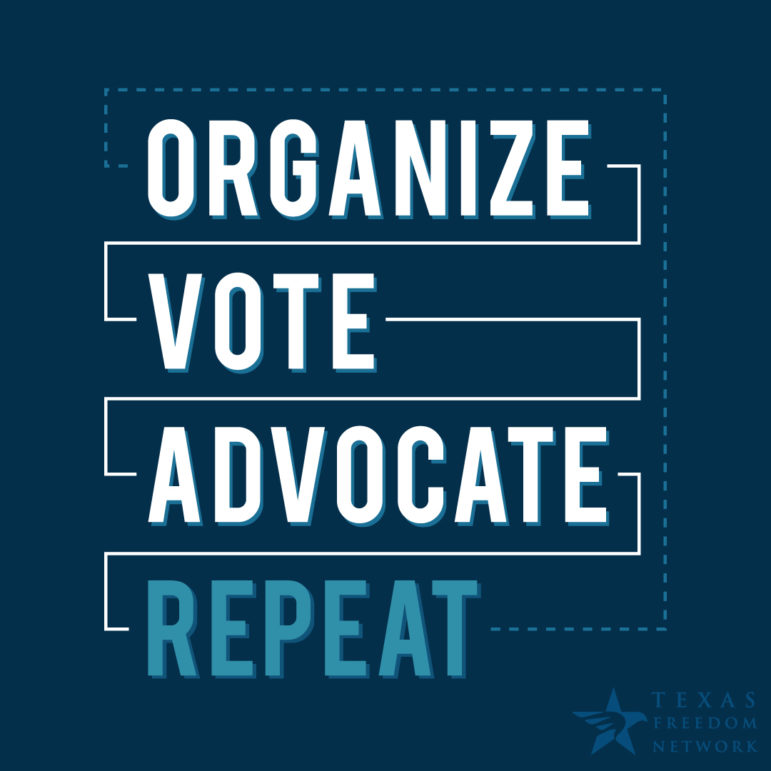 The ballot counting in key states has served as an important reminder: Every vote matters. Now we know that change is coming for our nation after four long years of darkness and division. Achieving this milestone reflects the long-term organizing that has occurred in many states across the country. Our long-term organizing in Texas continues.

To be clear, the election results weren’t all that we hoped for in Texas. But the numbers here also tell a powerful story: the youth vote played a major role in making Texas — for the first time in decades — a battleground state at the national level.

TFN engaged in the biggest voter registration and voter mobilization effort in our organization’s history. Our Texas Rising leaders and activists contacted more than 1.6 million eligible young voters, especially young Texans of color, to get them to the polls. We also launched an expansive get-out-the-vote digital campaign focused on Texans ages 18-29. And we saw big results: turnout among young Texans during early voting (when the vast majority of Texans cast a ballot) was more than double the 2016 count, and their share of the vote increased more than for any other age group.

The huge turnout helped make the presidential race in Texas the tightest in decades. Republican majorities in the state Senate and the State Board of Education will be smaller next year. And Democrats protected their gains from 2018 in other critical state races.

This progress was possible because you and so many other progressive champions worked hard to bring change to Texas. And we are grateful for your support of our work to ensure that every Texan, regardless of age, race or zip code, can cast a ballot.

We have always known that changing Texas will take time and a lot of work. So TFN and Texas Rising remain intensely focused on our long-term strategy stretching back well over a decade now — organizing the fast-growing and rising generation of young, diverse, progressive voters that is clearly the future of this state. And we are looking for bigger victories in Texas in 2022 and 2024.

But we still have much to do. Republicans made it clear they will do everything they can to stop our progress by suppressing the vote. So we will fight at the Legislature and the local level to protect the right to vote and make it easier for Texans to cast a ballot. There are no shortcuts to this work.

But with your help, we will build on the surge in voting this year to increase youth civic participation through year-round organizing and advocacy, encourage progressive young Texans to continue to vote, and help ensure that our elected leaders don’t ignore the votes and voices of this rising generation.

As we move on to the work ahead, the Texas Freedom Network and Texas Rising make this our road map to victory and genuine progressive change at the Legislature, in local government, and at the ballot box: Organize. Vote. Advocate. Repeat.