During the Texas State Board of Education‘s revision of social studies curriculum standards in 2009-10, David Barton insisted that the board delete labor and civil rights icon César Chávez from a section on citizenship in the Grade 5 standards:

“(H)e certainly lacks the stature, impact, and overall contributions of so many others; and his open affiliation with Saul Alinsky’s movements certainly makes dubious that he is a praiseworthy to be heralded to students as someone “who modeled active participation in the democratic process.”

Barton, the head of the Texas-based, far-right organization WallBuilders, also opposed including Dolores Huerta in the standards, weakly arguing that she wasn’t really a historical figure since she was still alive. After a state board member later complained that Huerta is a socialist, her colleagues did vote to remove her from a section on citizenship in the standards for Grade 3. Considering his reaction to President Obama’s decision to award Huerta with a Presidential Medal of Freedom on Tuesday, perhaps Barton’s real problem with Huerta also was her politics. Barton tweeted today: 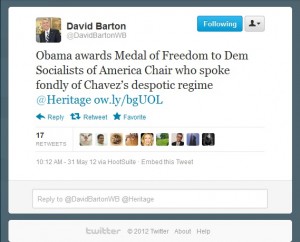 Huerta has been recognized over the years with numerous honors for her work as a labor and civil rights leader. Just a few of them:

But for fanatics like Barton, Huerta isn’t good enough because he doesn’t like some of her political views. So it seems that in his mind, Huerta — and César Chávez — must be blacklisted.