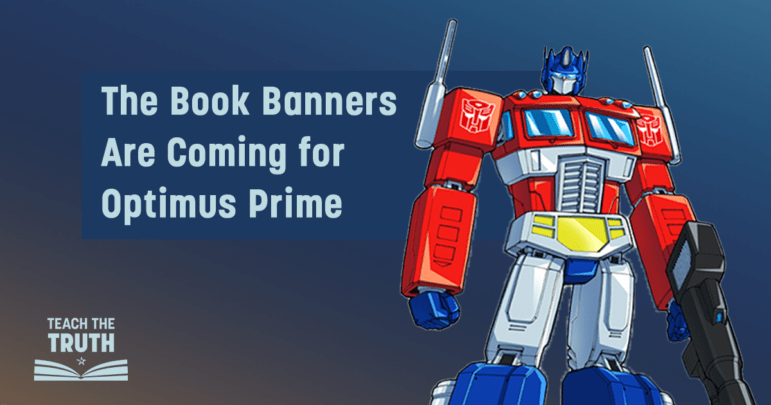 Now, the book banners are coming for Optimus Prime.

There are many reasons why the recent surge of books banned from school libraries should concern all of us. A major one is this censorship movement’s predictable descent into something that will likely leave you scratching your head, wondering just why the book banners came for that one.

It highlights how this movement isn’t entirely concerned with quality education, and it’s really all about control and playing politics with our neighborhood schools.

A case in point is the Houston Chronicle story digging into a list of books banned from Houston-area school libraries over the past five years. Most of the banned books are what you might expect given the recent surge, including books with LGBTQ themes or that detail our nation’s troubled history of racism, discrimination, and inequality. But buried in that list is one of those head-scratchers.

Yes, they banned the graphic novel version of a PG-13 movie about alien robots that turn into planes, trains, and automobiles, and back again. And they banned the book because … well, your guess is as good as ours.

This movement to ban books, fed by self-interested politicians and ill-intentioned activist groups, is bound to cause damage to our schools by denying students a fair, accurate, and quality education that reflects the world as it is. This movement overreached from the start, and now it’s doing it in weird and unexplainable ways.

They started by going after books with LGBTQ themes. They also went after books that create difficult but necessary discussions about race. Now, strangely, they’re going after Optimus Prime. Who or what will they go after next?

If you oppose book bans and education censorship, let’s work together to do something about it.