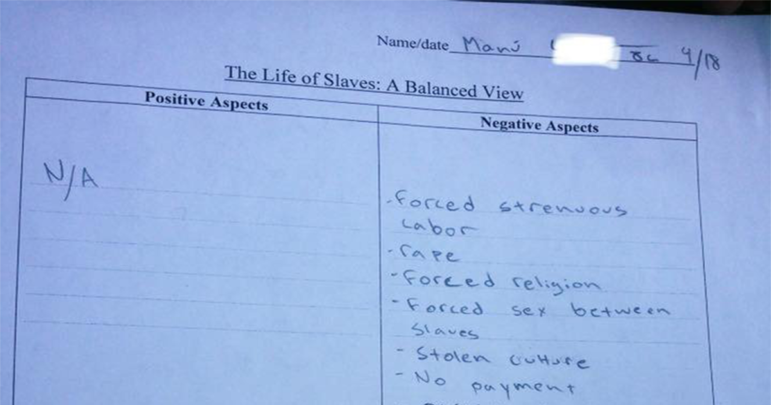 Last week, a picture of an assignment given at a San Antonio charter school was posted online. The appalling task assigned to students was to offer a “balanced view” of slavery by listing its “positive aspects” alongside the negative.

Once the picture went viral, the school apologized, the teacher was placed on leave and the publisher of the textbook used in the class said it did not endorse the assignment.

What the teacher intended with this exercise is for them to explain. What we’re able to do is offer some context, because if you follow the Texas State Board of Education (SBOE), it becomes clearer how something as absurd as this can filter down into your child’s classroom.

First, there’s the issue of the textbook, which the publisher says has nothing to with the assignment. We’re not so sure, to be honest. According to reports, the text is Prentice Hall Classics: A History of the United States, published by Pearson. Coincidentally, before this story became known, a Texas mother tweeted this picture of a passage from her daughter’s textbook, which happens to be the same book used in the San Antonio charter school. The passage has the kind of equivocating language — “While there were cruel masters who maimed or event killed their slaves … there were also kind and generous owners.” — that can lead to an exercise on the so-called “positive aspects” of slavery.

The textbook, by the way, was published in 2007. That same year, in a TFN report on the religious-right’s influence in Texas, we noted how conservative SBOE members “have criticized publishers for an ‘over-emphasis’ on the negative aspects of slavery in history textbooks.” That criticism has for years caused publishers who sought access to Texas’ massive textbook market to buckle to SBOE demands and make politically motivated changes to school textbooks.

In the decade since the book was published, the SBOE has adopted new social studies curriculum standards that cover topics like slavery and the Confederacy and on which publishers base their textbooks. But those standards still have language that sanitizes the Confederacy and downplays the role of slavery in causing the Civil War. In fact, slavery is listed not as the first or the second, but the third on a list of what caused the war, behind sectionalism and – you guessed it – state’s rights.

So while news of the “positive aspects” assignment was appalling, we’re sorry to say it’s not shocking.

If you want to do something about all of this, we’ll remind you that the SBOE this year will be streamlining its social studies standards. While the state board will not be conducting a total overhaul of the standards, it has the opportunity to at least correct some errors, including some related to the how slavery and the Confederacy are covered in public schools.

For more info on the streamlining of standards, visit tfn.org/TeachTheTruth.