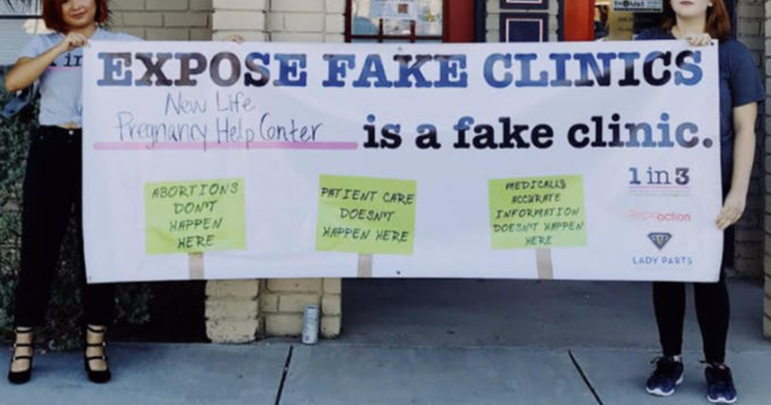 The right’s hypocrisy on abortion and the First Amendment was clear to see last week as the U.S. Supreme Court took up a California case involving a state law regulating so-called “crisis pregnancy centers.” The law requires health clinics to tell patients that free or low-cost services like birth control and abortion are available through state programs. It also requires crisis pregnancy centers — fake clinics that exist primarily to mislead, lie to and shame women seeking an abortion — to tell clients that they actually offer no health care services.

That would seem like common sense to most folks: tell patients about all services available to them and tell them the truth if you don’t provide any health care services. But anti-abortion groups are howling mad. They claim the law violates the First Amendment rights of anti-abortion clinics by requiring them to give patients that information, and they say that fake clinics shouldn’t be forced to tell clients that they can’t and wont’ provide health care services. “Compelled speech is not the answer to cultural conflict,” one Texas-based religious-right group argued last week.

Well, that group should know something about “compelled speech.” It and other anti-abortion groups support a Texas law that requires health care providers to give women seeking an abortion a state-mandated booklet that is filled with lies and misinformation. It falsely claims they will face an increased risk of breast cancer, future infertility and depression. The scientific evidence shows this is simply not true. State law also requires providers to describe a mandatory sonogram in detail to patients seeking an abortion — even if the patients don’t want to hear it.

Anti-abortion groups have no problem with laws that compel providers to repeat anti-abortion propaganda, but they oppose any law that requires fake clinics — which in Texas have been the beneficiaries of millions in taxpayer dollars courtesy of the Texas Legislature — to tell potential patients the truth. And they support legislators who use lies to justify the passage of more and more laws designed to shut down clinics and make it harder to access abortion care in Texas.

Read more here about how politicians are using lies and misinformation to pass anti-abortion law across the country. The Texas Freedom Network Education Fund and the National Partnership for Women & Families area calling out these politicians. Learn more about this campaign and join us here.